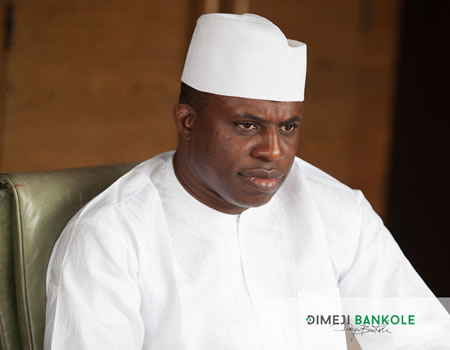 FORMER Speaker of the House of Representatives, Honourable Dimeji Bankole has finally called it quit with the erstwhile ruling party, the Peoples Democratic Party, (PDP). The former PDP chieftain was mentioned on Thursday alongside 31 others as members of a 32-man Contacts and Mobilisation Committee of Action Democratic Party (ADP).

Although the former Speaker of House of Representatives was absent at the event held in Abuja, his father Chief Alani Bankole who is the chairman of Board of Trustees of the new political party confirmed that his son has since dumped the PDP. He, however, refrained from commenting on Honourable Bankole next political ambition. ‘’ My son is nearly 50 years old. Where l come from, l don’t talk on behalf of such elderly person. He will tell you if you ask him,” he told newsmen.

Inaugurating the Committee which has Senator Roland Owie as chairman, national chairman of the ADP, Engineer Yabaji Sani, appealed to the team to “to serve as a vehicle to reach the unreached or reluctant to embark on decisive measures to rescue Nigeria.’’

He, however, admonished them to steer clear of those who have soiled their hands in the past in the course of galvanizing people to join
the new party.

He further restated his condemnation of the administration of the country by the ruling All Progressives Congress (APC).

“Our economy is in the doldrums, education has virtually collapsed, insecurity has become pervasive with several of our countrymen and
women mowed down daily by criminal elements.

“Obviously, we can not keep silent in the face of evil and daunting challenges. ADP has stepped in to change the narrative. We are determined to rebuild Nigeria into an egalitarian nation where tribe and religion will never be factors that determine a citizen level of attainment.”

In his remarks, chairman of the committee, Senator Owie assured the party leadership of his team determination to work diligently on the assignment it has been saddled with. He further declared that present the administration has plunged the country into what he called avoidable hardship.

‘’As this great Committee sets on this sacred mission to rescue Nigerians and to give them the much better living condition alternative, it may be important to remind us yet again, how the lives of Nigerians have further worsened following the 16 years of misrule by the PDP and the worst and prolonged sufferings of Nigerians under APC. It is like jumping from frying pan to fire. This suffering must not continue.

“Our sheer determination is to build an ADP, where the strength of the party discipline and supremacy is our mission in ADP and we cannot afford to continue to go the wrong method of PDP and APC, where elected government officials are the ones who call the shots for the party, thereby bringing about imposition of candidates and officers for elective and other positions. In the first and second political dispensations, the political parties were supreme to the executives, it elected into power.

‘’And as well-meaning members of this great committee, who have this mandate of reaching out and mobilising Nigerians for the ADP’s
momentum, we must be very careful not to allow the undue and overriding influences of those fair weather politicians to mislead us. We must enlighten and change them into the ADP redeeming template which they must not change or destroy.’’

Defeat at elections shouldn’t be condition for deregistration of parties, ADP…