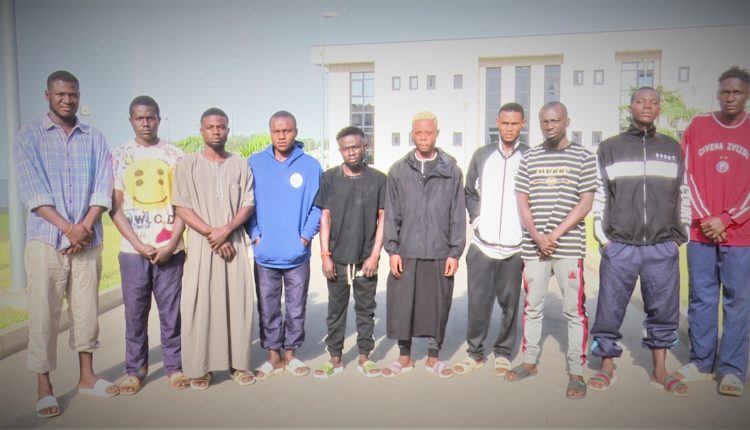 The Economic and Financial Crimes Commission (EFCC) on Friday arrested 10 young men who were said to be undergoing training on internet crimes in an ‘Academy’ in the Federal Capital Territory, Abuja.

According to the anti-graft commission in a statement, they were arrested at their ‘Academy’ in Bwari axis of Abuja where they were said to be learning the trade of cybercrimes.

They were arrested with different items such as mobile phones and computers while the promoter of the ‘Academy’ fled during the arrival of officials of the EFCC and is currently on the run.

Investigations by the EFCC showed that the promoter of the ‘Academy’ recruits and trains young individuals who show interest in internet fraud.

According to the EFCC: “The promoter gets his percentage of their earnings based on an agreement between him and the recruits. He also serves as a conduit for laundering the money gotten from internet fraud by some of the suspects.”

The statement added the 10 young men suspects would be prosecuted when the investigation is completed.

The surprise visit made on Friday night by the leaders of the ruling All Progressives Congress (APC) to former President Goodluck Jonathan at his residence in Abuja triggered a stir in the major political camps, resulting in at least four possible theories..10 Yahoo Yahoo students  10 Yahoo Yahoo students

We’ll enforce laws of the land, no matter how highly placed you are, Oyo CP warns

FG to commence procurement process for concession of highways