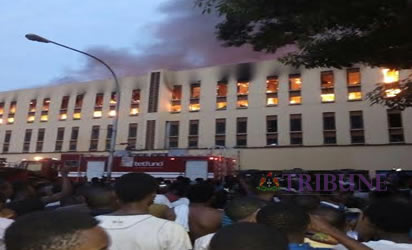 The Rector, Yaba College of Technology (Yabatech), Dr Margaret Ladipo, on Wednesday visited 13 students of the institution on admission at the College Medical Centre and the Military Hospital, Yaba.

The students were admitted following the fire accident in one of the college hostels in the early hours of the day.

Mr Charles Oni, the spokesperson of the college, said in a statement in Lagos that the rector prayed for the students and gave them monetary gifts, among others.

Oni said that the rector reassured the students that the management was with them and would always be by their side in ensuring they return to their studies before the weekend.

“Already, efforts are in top gear to redistribute the affected students into other available hostels pending the repair of the burnt two floors,’’ he quoted the rector as saying.

According to the statement, there were moves as at press time to evacuate students from the Bakassi hostel to allow for structural testing of the entire building following the accident.

The spokesperson said that Ladipo urged parents not to panic as their children were in safe hands, thanking God that no life was lost to the fire.

The News Agency of Nigeria (NAN) reports that the management has suspended all academic activities between Wednesday and Friday following the incident.