Opinions
By Mofehintoluwa Koye-Ladele On Feb 11, 2021 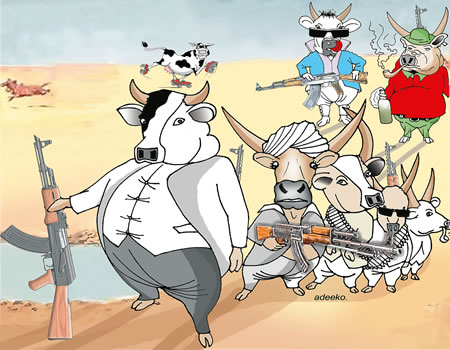 My first encounter with the name Igboho was when as a 12-year-old, the stories were rife that he could commandeer a gun from the air and ‘return’ the gun to the air when done. I have it in mind to ask him to demonstrate this feat whenever I manage a personal meeting with Igboho. We heard his name daily then but always for the wrong reason. It was usually associated with political thuggery. Whether or not Igboho can produce a gun from the air, it is clear he is at the head of a popular agitation. Agitation by nature starts with the complaint of the people. When it becomes incessant and is ignored, a martyr or hero takes up the cause and he leads it. We have seen this during the struggle for independence in Africa. Someone somewhere starts a movement in a nation and fights out the colonialists. This is who Igboho is in the present situation.

There is a crisis as herdsmen have been attacking helpless farmers over grazing land. It reached a head when a doctoral degree holder was killed. Igboho moves to the theatre and he is massively welcomed. He declares a quit notice and he arrives again to effect his quit notice. The crowd behind him cannot be bought. You can’t buy that number of people. They came out with faith and a statement of a ‘we are tired, lead us.’ The herdsmen have been fighting the farmers from the biblical times. It is not a conflict that started today. The farmers/herders clash is not peculiar to Nigeria. However, countries like Argentina have tacked it. It is a problem that has been solved elsewhere and we have copious examples.

International Meat Trade is a business. Billions are made in forex. Leather is sold. Milk is sold. Meat is sold. It’s a real business bringing in sustenance for a country like Argentina. In Nigeria, it is a problem which leads to loss of lives. Capitalism leads us to a simple question: where are the owners of the cows? The real earners of the money. The herdsmen are usually fronts for big men who own the cows. These herders who have been violent on occasions keep the cows for rich bourgeoisie. The government has to identify the capitalists! When they are unmasked, they can be brought together under a comprehensive national association. The Miyetti Allah is more or less an ethnic affair. We must be ready to treat this matter as one of business. Herding cows around reduces their meat quality. The cows expend much energy moving from the North to the South such that their meat is usually lost and the best way to raise a cow is to put it in an enclosure where it is fed. This enclosure should be purchased by the person who trades in the cow. Cattle rearing is also a business.

All cows in Argentina are numbered. The cows in Nigeria should be branded. This system of branding ensures that the owner of the cow has his name written on the cow. Wherever this cow is seen, we have an idea who owns it and can charge him to court whenever they trespass into private property or farmland. Igboho has raised a banner that has drawn people who are tired of the lethargy the Federal Government has expressed. Where is the Federal Government when they kill farm owners? This government has to come out and show us what it has done in time past to murderous herdsmen. The narrative that not all herdsmen are criminals requires more than a statement. Let Miyetti Allah parade her members who have killed in time past if we are serious about not categorising all herdsmen as evil.

The acquisition of land by conquest is already invalidated under the Nigerian law. No man can acquire any piece of land by forcefully taking it over. The process for acquisition of Land is spelt out in the Land Use Act. An existent caselaw in Kuma vs Kuma also invalidates such mode of acquiring land by violent takeover. The Federal Government cannot stop reprisals when there are continued killings. People will not wait for government before they take actions that can preserve their own lives. In a nutshell, Igboho is standing at the head of a crowd that has gathered because they have lost land and life to the activities of herdsmen who mainly of Fulani extraction. The herdsmen crisis is a blessing and not a curse. There must be coordination of efforts towards commercialising the potentialities of cattle. Nigeria must begin with a database project of who owns the cows.

To be futuristic, who and who is into cattle rearing? Who owns the cows being grazed? Where should the cows be kept instead? Can all cows be branded and identified such that whenever they are seen, the owner is known? Enforcing the law already passed that restricts cattle from certain areas should be taken seriously.

The illegalization of purchase of any cow that is not properly branded and brought to the market from an authorized dealer should be enforced. The slaughterhouses must buy from only accredited herdsmen available on government database whose feeding of their cattle is not against the law and not murderously. If this matter is not contained, it will be the foundation for the unveiling of ethnic fears. The country cannot run down Sunday Igboho who actually has the backing of millions of people. Nigerians must demand that the President Buhari should go on air and announce/plead with the herdsmen not to cause crisis in their host communities and if they do so, the law should be swift on them. An example must be made of herdsmen who have killed farmers earlier.

There is every tendency that emotions may rise and the whole matter will go out of hand. The Federal Government must wake up to her responsibilities.