The Voice Nigeria sets off with a thrilling start 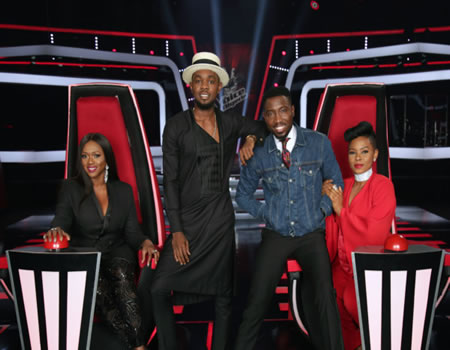 The thrill and excitement of The Voice Nigeria hit fever pitch as the show returned on Sunday, 18th of June 2017. The coaches got the show running with a medley of their individual tracks and this set the tone for the contestants’ blind auditions which followed.

At the end of Sunday’s episode, first time coach, Yemi Alade signed on her first three as Ifeoma Onu, Jahn omsoIlem and Olanrewaju Omowa joined, while #TeamTimi signed on Emmanuel Precious and Jahtell.  Favour Idugbe who got all four coaches very excited and Afolayan Adeleke joined #TeamPatoranking, while #TeamWaje signed on Zorah Julius.

Season two of the Voice Nigeria is off to a thrilling start and there is even more excitement to come in future episodes!

Aregbesola cautions US over Trump’s decision on climate change

#COZA: Biodun Fatoyinbo returns to pulpit 35 days after stepping down over rape…