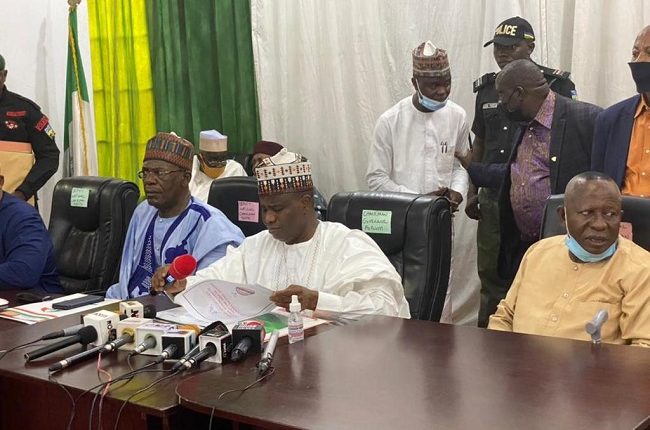 Prince Uche Secondus on Friday returned to office as the National Chairman of the Peoples Democratic Party (PDP) following a Kebbi State High Court ordering him to do so.

But he was not allowed to attend the meeting of the national caucus of the party holding the same day.

The seat usually reserved for him at the meeting was occupied by the acting National Chairman of the party, Elder Yemi Akinwonmi.

Secondus had been seen in the company of other party leaders including Chairman of the PDP Governors Forum, Aminu Tambuwal, coming from his office to NEC Hall, the venue of the caucus meeting but was apparently prevailed upon not to enter.

In his opening remark at the meeting, Akinwonmi disclosed that a letter was served on him Friday morning just as he arrived for work at the secretariat.

He told the caucus that the letter was very important and wanted it discussed before any other matter.

However, he was encouraged to step it aside as he went to give his remaining opening address.

Akinwonmi stated: “While I was still panting after I managed to climb the stairs to my office that was too stressful for me, a letter was served to me. I know the letter would be of importance to this meeting and I received it.

When Secondus came into the Wadata Plaza Abuja national secretariat of the main opposition party Friday morning, he headed straight to his office.

He was later seen on his desk flanked by Elder Akinwonmi and former Ogun state governorship aspirant of the party, Ladi Adebutu.

Pressed to speak on his resumption, Secondus said the Kebbi state Court order that restored him to the office was being obeyed just as the previous one from Degema in Rivers state asking him to step aside, was obeyed.

He declined to speak more, saying that it was not yet time to grant an interview.

Recall that following the Rivers state High Court order, the party through its organs including the Board of Trustees (BoT) and PDP Governors Forum affirmed Akinwonmi as the acting National Chairman.

However, the National Secretary of the party, Senator Umar Tsuari in response to a question Thursday had alerted that if there was another court order on Secondus, the party would still obey it.

In his remark at the commencement of the National Caucus meeting, the Chairman of the PDP Governors Forum and Sokoto state governor, Aminu Tambuwal, said that the governors under the party were working together for the good of the party and Nigeria.

He assured that the party leaders have the capacity to resolve all its problems.

“I have the confidence that, by the grace of God, whatever issues we have, we shall be able at this caucus meeting to resolve them.

Addressing the issue of Secondus return at the end of the meeting, Tambuwal told reporters that the party was yet to receive the court order restoring him to office.

He said a committee set up by the National Caucus would look into the matter and make appropriate recommendations.

“Well that matter came up (in the meeting), and in view of the fact that we are yet to receive the service of the court order, this committee is going to look with all the parties involved accordingly,” he said.

Briefing on the resolutions of the National Caucus, the Sokoto state governor disclosed that it recommended September 29-30, 2021 to the National Executive Committee (NEC) as the national convention dates.

He also said that the meeting set up a panel headed by former Senate President Bukola Saraki to work with members who have cases in court to withdraw them.

Tambuwal stated: “We have just risen from our 40th meeting of the National caucus of our great party the PDP, where we have resolved to submit to the NEC of our party tomorrow, a recommendation from the National Working Committee for the national convention of our party to be held between Friday 30th of October to Saturday 31st of October, will be determined by the grace of God tomorrow by NEC.

“Also, this distinguished body had empanelled distinguished leaders of our party, under the leadership of former President of the Senate, Senator David Mark to interface with our leaders who are involved in these issues of the court, so that all court matters can be now withdrawn. And then for normalcy to return to the party.

“I appeal on behalf of this body to all well-meaning members of our party to sheath their sword. Let us embrace peace because Nigeria is waiting for PDP and I believe that we have the capacity to resolve whatever issues we have internally. Thank you very much.”

Among the party leaders who spoke before the commencement of the National Caucus meeting were former Vice President Atiku Abubakar, who observed that PDP had been through bigger crises and came out stronger.

“We are here today and I believe that our deliberations will be guided by maturity, by integrity, by intelligence which are all hallmarks of our great party. We have gone through greater crises in the history of this party and we have come out stronger each time. And I also believe that we are also going to come out of this crisis stronger. That will lay a foundation to our returning to power in 2023,” he said.

Also speaking, Senate Minority Leader, Eyinnaya Abaribe, assured that the National Assembly would remain behind the effort to chart a way forward for the PDP as he noted that Nigerians were looking up to the main opposition party.

He added: “The National Assembly is behind this effort for us to continue to work to make PDP chart a way for Nigeria.

“The National Assembly is also aware that at this time, everyone is looking at PDP to show the way because we know that the other party have themselves admitted failure when the president of the party who is in the other party said that he will never end a failure. He also admitted that failure is following him as he is going.

“So, what we want to do is to ensure that PDP gives Nigeria the best type of administration come 2023.”

In spite of the huge investment in the water sector by the government and international organisations, water scarcity has grown to become a perennial nightmare for residents of Abeokuta, the Ogun State capital. This report x-rays the lives and experiences of residents in getting clean, potable and affordable water amidst the surge of COVID-19 cases in the state…Secondus returns to office  Secondus returns to office

Ekiti: Fayemi and things not talked about