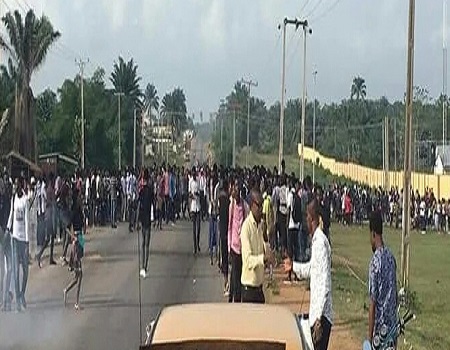 Scores of students of Osun State University (UniOsun), Osogbo main campus on Thursday staged a protest against what they termed arbitrary arrest of several students and invasion of their hostels by security operatives in the morning.

The protesters caused traffic gridlock as they blocked  Osogbo/Ibokun while the demonstration last.

One of the students of the institution, Tayo Mosadope who spoke to journalists explained that armed security operatives stormed some hostels in Oke Baale area of Osogbo around 7 am and whisked away about 20 students and some occupants of the hostels who were not students.

According to Mosadope “the security men that came did not wear anything to indicate where they come from. But we know they are operatives of EFCC.”

“About 20 students were arrested. Some non-students that are living around were also picked up. A staff of the university that was caught recording activities of the security was also arrested.”

Meanwhile, some policemen later stormed the scene to disperse the protesting students.

The Acting Dean of Students Affairs, Mr Dare Adeyemi, however, confirmed arrest of about 15 students of the school by security operatives, saying the management of the university was making efforts to stop the protest.

Reacting over the development, the Vice-Chancellor of UNIOSUN, Professor Labo Popoola said the management of the institution cannot stop the arrest of students suspected to have been involved in criminal acts.
He maintained that “the management of Osun State University has made it clear to our students that it will be a misadventure to protest the arrest of individuals suspected to be involved in crime.”
“No one can stop investigations. The outcome of investigations will determine the next steps of the University. Significantly, the arrested students were not in our hostels. They were in private hostels outside the campus”, Popoola remarked.