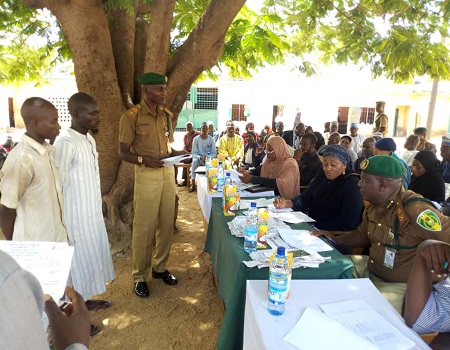 The jail delivery exercise saw the release of 6 inmates from Jama’are Prison, 13 from Bauchi Prison, 2 each from Misau and  Azare 2, 4 from Alkaleri, while Ningi and Zaki 1 respectively, to make up a total number of 29 inmates who now free.

The State Chief Judge, Rabi Talatu Umar in the company of members of the  State Administration of Criminal Justice Committee visited the five main Prisons in the State and two other Satellite Prisons where she reviewed cases of awaiting trial inmates with minor offences and released 29 out them in order to decongest the prisons.

While briefing newsmen shortly after the exercise at the Bauchi Prison, Justice Rabi Umar decried the delay in the duplication of case diaries of suspects with capital charges from the Police and the State Ministry for Justice.

She then urged the two agencies to work hand in hand with a view to ensuring speedy dispensation of Justice and  ordered the release of five inmates in Bauchi Prison who have stayed for over five years without trial as their case diaries could not be duplicated by the Police while their files could not be found with the State Department of Public Prosecution.

While the State Chief Judge commended some Magistrates and Sharia Court Judges in the State for their diligence towards effective dispensation of Justice, She, however, frowned at others and summoned three of them to her office for obvious irregularities.

In his remarks, the Controller of Prisons Bauchi State Command, Suleiman T. Suleiman, commended the Chief Judge for carrying out the exercise adding that it will go a long way in decongesting prisons in the State.

The Controller of Prisons also congratulated those who benefitted from the exercise and advised them to be good citizens and avoid any criminal activity that will make them return to the prisons just as he told those who have learned one skill or the other while in the prison to put them in to use in order to better their lives.