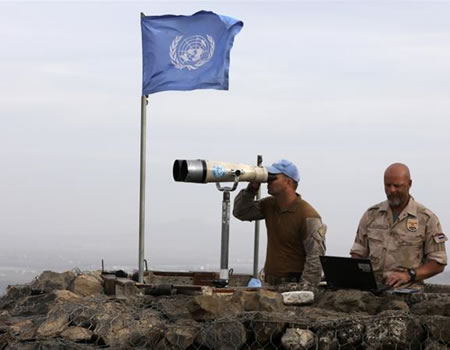 The UN chief has called “for an immediate and unconditional de-escalation of violence” after Israel launched intensive air raids on what it called Iranian bases in Syria, raising tensions in the region.

“[A]ll concerned in Syria and the region has a responsibility and must abide by international law and relevant Security Council resolutions,” Antonio Guterres said in a statement on Saturday.

“The secretary-general is following closely the alarming military escalation throughout Syria and the dangerous spillover across its borders,” the UN chief’s spokesman Stephane Dujarric said.

The Israeli army on Saturday launched “large-scale” attacks inside Syria after intercepting what it said was an Iranian drone that entered occupied Golan Heights and the subsequent downing of an Israeli fighter jet by Syrian air defence forces.

The UN chief’s reaction came after Russia, which intervened in support of Syria’s President Bashar al-Assad in 2015, said they were “seriously concerned” by the confrontation.

“We urge all parties involved to exercise restraint and to avoid any actions that could lead to an even greater complication of the situation,” Russia’s foreign ministry said in a statement.

“We consider it necessary to unconditionally respect the sovereignty and territorial integrity of Syria and other countries of the region,” it added.

The White House expressed its support for Israel after the hostilities.

“Israel is a staunch ally of the United States, and we support its right to defend itself from the Iranian-backed Syrian and militia forces in southern Syria,” the White House statement released late on Saturday read.

“We call on Iran and its allies to cease provocative actions and work toward regional peace.”

The Pentagon and the Department of State made similar comments earlier on Saturday.