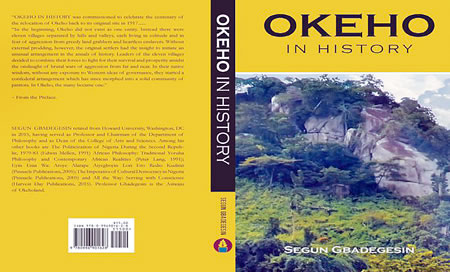 IN the humanities, the phrase ‘the part is a mirror of the whole’ is a very popular maxim. Okeho in very many respects mirrors what is going on in Nigeria and in many other countries in Africa. What has just been stated is not a hyperbole but a fact as would be demonstrated very shortly.

As stated in the blurb and preface of the book under review, ‘Okeho in History’ was commissioned to celebrate the centenary of the relocation of Okeho back to its original site in 1917.

Besides educating everyone about the background of the town, the underlining motive of the book is to call the attention of the indigenes to the hopes and developmental challenges of their community.

The extent to which it lives up to this intendment would be gleaned from an excursion we are now taking into the landscape of the 232-page publication.

Part One is appropriately titled In the Beginning, Part Two contains items that deal with Governance Institutions. In Part Three, issues treated come under the collective title Religion and Spirituality. Issues pertaining to Education are treated in Part Four while parts Five and Six respectively deal with The Economy and Health and Communal Life makes up Part Seven.

The final part, which is the conclusion, discusses the various ways by which Okeho can be ‘taken to greater heights.’

Let me state from the onset that the author of this book, Professor Segun Gbadegesin, although a philosopher by training and vocation, demonstrates a good knowledge of historical ethos. This should not be surprising since no one can be a good philosophy scholar without having a good knowledge of some historical figures and ideas.

Beyond the call of duty as a philosophy scholar, the author is also an individual with veritable interest in historiography/history. An accomplished scholar, Professor Gbadegesin is also exemplary in community service. No wonder, he was bestowed with the title of Asiwaju of Okeholand. He has certainly been living up to the demands of this office as attested to, among others, by the publication of this book.

The book appropriately opens with the location of the subject matter: Okeho. The town is found in the heartland of the Yoruba nation. Research carried out established a notion that has always been in the public domain to wit: Okeho is an amalgamation of eleven villages. The villages voluntarily decided to come together for protection and self-survival; a very smart move indeed.

The baale of Ijo whose domain is more strategically located was the one who invited others at different times. For this reason, it was conceded that he assumed the overall leadership of the new settlement. Two points are important to be made at this juncture. The first is the mindset of the then Onjo – an insight into the temperament of the people of yore. For the fear of possible challenge to his leadership position, someone else might demur in having others come near him – especially equally powerful personalities. It is natural for one to want to be protective of one’s ‘privileged’ position. Thus, it was not impossible that such a fear was entertained by the then head of Ijo, Arilesire. Reading between the lines of this insightful book along with its predecessor, Itan Ilu Okeho, the overall interest of the people, their safety particularly, was uppermost in the minds of not only Onijo Arilesire, but heads of the communities that decided to amalgamate with Ijo. This was around 1800.

The second point relates to how Okeho mirrors Nigeria. We are aware that Nigeria is an amalgamation of several nations, but while Okeho was able to forge a town out of several hitherto separate settlements within a short time, the more the years advance, the more Nigeria is falling apart. As stated in the preface to the book under review, ‘in the voluntary merger and preservation of the heritage of each of the constituents, Okeho also taught us a great lesson in the management of diversity.’

Considering the fact that on an occasion like this, there would not be enough time to go into long treatise, permit me to just highlight salient issues raised in this book.

As stated on Page 95, the economy of the community was built on communalism in which people co-operated with a view to advancing the interest of the individual and that of the community as a whole. What kept this system thriving then was the honesty and trust that abounded.

In his concluding remarks, Gbadegesin states: “We need others as they need us to make the world a habitable and better place for all people.” (P157). This message is for Okeho people as it is for the people of Oke-Ogun as well as Nigeria as a whole.

Understanding the practical faith of a woman of substance

Book Review: An elder statesman’s history and his country’s politics