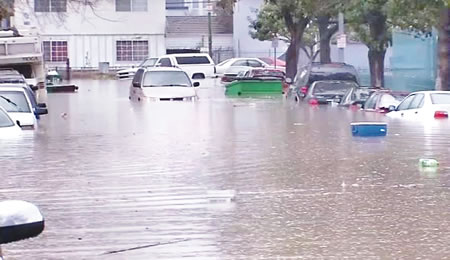 IN one of the alerts it issued, the Nigerian Meteorological Agency (NiMET) forewarned of torrential rainfalls in the country and the far-reaching implications. Residents of states such as Akwa Ibom, Bauchi, Benue, Borno, Cross River, Delta, Kaduna, Kwara, Nasarawa, Yobe and Zamfara were specifically advised to guard their loins, apparently with the belief that the authorities had before now taken preemptive steps to avert calamities arising from flooding in the past. Sadly, however, Nigerians are, as usual, bewailing the perennial floods. In the last few weeks, scores of people have lost their lives, and many others rendered homeless as floods wreaked havoc across the country.

At least 12 people died, with many feared missing, in the flood resulting from a three-hour downpour in Abeokuta, the Ogun Sate capital. Many vehicles were submerged and houses and other properties destroyed when the Ogun and Sokori rivers overflew their banks. Areas mostly affected in the city were Ijaiye, Kuto, Lafenwa, Oke Lantoro, Amolaso, Kobiti and Ilawo. In Katsina State, a period of heavy rain culminated in severe flooding that claimed the lives of 48 persons, with invaluable property destroyed and thousands of people rendered homeless. In Niger State, a similar disaster led to the loss of eight lives.  Residents of Yobe, Cross River and other states are still counting their losses.

Even though NiMet’s prediction may not be cast in iron, it presupposes that proper planning, capacity building and other precautionary measures could have mitigated the consequences and forestalled the calamity and sorrow caused by the flooding across the country. Its warnings, it appears, were ignored, and the authorities only took cosmetic measures, waiting to offer palliatives to the victims and to cry over spilt milk. Another strategic intervention agency like the Nigeria Hydrological Services Agency (NIHSA) equally raised concern on the menace of flooding in the country. In its 2018 Annual Flood Outlook, the agency warned that 380 local government areas in 35 states risked flooding, with 78 flood-prone areas likely to be most affected.

The tragedy of the Nigerian flood situation is that most of the causes are fabricated. Only in a few instances are they natural. Improper refuse disposal, indiscriminate erection of structures on the part of the public, and improper planning and unbridled corruption on the part of government and its agencies and officials are some of the major causes of the flooding. Bridges and roads are constructed without proper drainage systems and provision for general maintenance and monitoring to guard against environmental abuse by the citizens. The technical design of roads, bridges and other facilities is often indicative of professional deficiency, and many of the inadequacies become manifest during the rainy season.

It is also saddening that funds meant to tackle flooding and other environmental challenges are known to have either been misappropriated or mismanaged by ministries, agencies and departments. Contractors are known to have disappeared into the thin air after collecting contract sums. Money drawn from the Ecological Fund, established in 1981 to tackle soil erosion, flooding, desertification, general environmental pollution and natural disasters, are considered as free funds to be expended any how those in power deem fit. According to reports, the management of the fund is subject to varying degrees of abuse, including diversion, mismanagement, and full payment for substandard and abandoned projects. Multibillion naira projects certified completed by government engineers and other officials are abandoned or left uncompleted even when the contractors have been fully paid. Yet, the Ecological Fund Office (EFO) in the Presidency once decried the fact that it received only between N12 billion and N15 billion quarterly, whereas over N1.1 trillion was needed to address flooding and soil erosion.

More shocking is the poor management of funds accessed by governments. A four-year audit report (2007-2011) on the EFO carried out by the Nigeria Extractive Industries Transparency Initiative (NEITI) found that the government diverted several billions of naira from the fund to projects clearly not ecological in nature. A Senate investigation corroborated the finding, claiming that about N500 billion meant to tackle flooding, erosion and environmental challenges across the country was diverted by both federal and state governments. There is, therefore, the question of integrity test for all public officials with access to the fund if the country is to overcome flooding and other environmental challenges. No amount of compensation, condolence and sympathy visits by top government functionaries and politicians can bring succour to the victims of flooding across the country.