Prior to the turn of events in the crisis rocking the ruling All Progressives Congress (APC) last Wednesday, the power play over the forthcoming governorship elections in Ondo and Edo State this had been the focus of the stakeholders. STEPHEN GBADAMOSI writes that now, the scope has been expanded to involve politics of 2023.

Politics
By STEPHEN GBADAMOSI On Mar 8, 2020 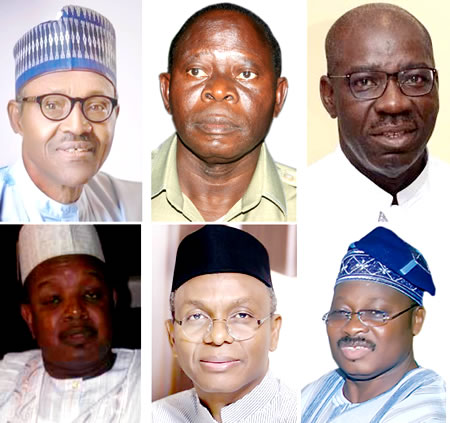 EVEN though the elections are six and seven months, respectively, away, tendencies in the ruling All Progressives Congress (APC) in Edo and Ondo states have fixed their gaze on the governorship polls coming up this year. In effect, watchers of events in the politics of the two states have been pointing out intense efforts of one group to outdo the other, not only in the ruling party, but also in other ones interested in wresting power from the APC in both states, particularly the major opposition, the Peoples Democratic Party (PDP).

Recently, the Independent National Electoral Commission (INEC) axed some 74 political parties as a result of alleged lacklustre performance in past elections, leaving only 28 on the turf. Though some of the parties have gone to court challenging their deregistration, watchers of the Nigerian political space have said the step does not give much hope to the affected political parties, according to an analyst, who added that this is “because even if the court makes INEC to reverse itself, they (political parties) lack the luxury of time.”

Some would have seen the foregoing as an advantage for the APC, but analysts insist the development does not stop the groundswell of calculations against the ruling party.

A prominent politician from Akure, Ondo State told Sunday Tribune in confidence that “those who have anything you can call political clout in those deregistered parties are already forming alliance with people of like minds in other parties in opposition to our party. We are aware of that. Our leaders should be making overtures to those people too. But would they? Because of their greed, ego and the thinking that they have the power, they won’t cede anything to those people so as to let them join us and strengthen the APC further.

“But I can tell you, real politicians among them are not merely waiting for outcome of the suits challenging the deregistration; they have other things up their sleeves in the existing parties.”

Moreover, last Wednesday declaration of an Abuja High Court stopping Adam Oshiomhole from parading himself as the party’s chairman reportedly has a lot of political implications. For Edo, it has been suggested that Oshiomhole’s removal was local politics degenerating to the national stage. Even when another court of same jurisdiction said Oshiomhole should not be suspended, the embattled politician’s problems had not been solved. And upon his hurried meeting with President Muhammadu Buhari over the impasse on Thursday, things only got more confusing for the ruling party.

As a former aide of the national chairman, the incumbent second-term-seeking Edo State governor, Godwin Obaseki, is said to have garnered more than enough political clout to make minnow of his erstwhile godfather. He is one of the all-powerful Progressive Governors Forum.

Beside his interest that is believed to be certain for protection of the forum’s members, Oshiomhole is believed to have lost the confidence of some of the governors, particularly on account of activities leading to the primaries that produced candidates of the party in the 2015 general elections.

In some quarters, it is believed that Obaseki might have been a lad of the former Edo governor, but now, he has wormed his way into the hearts of the loyalists of President Buhari in the party’s equation.  At a time, it was speculated that if Obaseki failed in the power play with Oshiomhole, there was a Plan B to usher him into the PDP to realise his second term bid.

Ondo and its issue with Bordillon

Although there have been speculations that the feud between the camp of former governor of Lagos State and APC national leader, Senator Bola Tinubu, and Governor Rotimi Akeredolu, had enjoyed some rapprochement, the never-say-die stance of the like of Senator Ajayi Borofice must be a cause for concern for the camp of Akeredolu. Some analysts have said that Bordillon has not forgiven Akeredolu for his role in the last congress of the party in Ondo where he reportedly held the aces as against the will of the godfathers.

However, with the current development around Oshiomhole, Akeredolu too might be having the last laugh.

Political pundits have said that the positioning of former governor of Oyo State for the position of national deputy chairman of the party (South), hours before Oshiomhole was suspended, there was a grand plot to make him acting national chairman of the party. The constitution of the APC gives power to the national deputy chairman to act as national chairman in the absence of the chairman from his zone. With Ajimobi in acting capacity as APC national chairman, and the party’s congress some weeks away, the embattled governors of Edo and Ondo states might have another opportunity to put in place a formidable political formation to earn themselves the much-coveted second term.

It has also been said that what is playing out within the ranks of the APC cannot be unconnected with intense positioning and repositioning of the 2023 presidential election. Analysts said the camp of Senator Tinubu would be comfortable having Oshiomhole remain as national chairman of the APC or Ajimobi in his stead  in acting capacity, while certain interests in the Northern part of the country would tacitly support his ouster. Besides, even though the incumbent governor of Ekiti State and chairman of the Nigeria Governors’ Forum (NGF), Dr Kayode Fayemi, has said that he is not interested in contesting the 2023 presidency, watchers of events have said that he would not be comfortable with the choice of Ajimobi, should he change his mind and go ahead with the reported ambition. This may not be unconnected with why the state chapter of the party rejected the emergence of Ajimobi during the week.