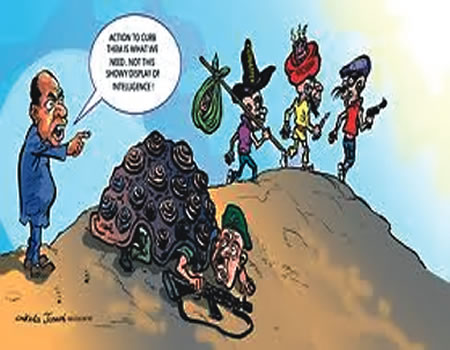 I have watched with concern how Nigeria’s National Assembly could not come up with a bill on how to investigate those sponsoring Boko Haram and ISIS in West Africa. There are several questions and allegations. I am worried.

A member of the Presidential Committee on the North East Initiative (PCNI), Dr. Sidi Ali Mohammed disclosed that Boko Haram fighters were being paid in dollars daily. He made this disclosure at the presentation of the International Monetary Fund (IMF) Sub-Sahara Africa’s Economic Outlook Report, in Abuja. The question now is who is arming Boko Haram and ISIS in West Africa? According to him, the payment dwarfs the N1, 000 daily allowance paid to Nigerian troops at the warfront.

Mohammed, who is the head of the humanitarian assistance and rehabilitation arm of the PCNI, lamented that Boko Haram has been hijacked and operates like a cartel.

There were reports that Turkey was a major supplier of weapons to Boko Haram. But Nigerians who are bearing the brunt of the war deserve to know precisely what is going on in these issues.  It was some months ago when the former president of Benin Republic, Mr. Nicephore Soglo, volunteered that Saudi Arabia and Qatar are funding Boko Haram. He offered his opinion at the constitutional term limits summit in Niamey, Niger Republic where he also suggested that Africans must stand united to solve their own problems and that it is an illusion to depend on others to do it for us.  “Boko Haram is funded by our friends from Saudi Arabia, and our friends from Qatar.  Are we friends or not?  Let’s tell ourselves the truth.  We have to stand together.  I’m optimistic we are going to win if we stand together,” Soglo said. The former president of Benin Republic says the Boko Haram terrorist group is funded by Saudi Arabia, Qatar and others.

North East is characterised by the use of more violent methods and continues to perpetrate systematic attacks against both Muslims and Christians. Anyone who does not support the group is perceived as a supporter of the government and may be targeted. It is reported that the group is more active near the border with Cameroon and it is present in south and central Borno State.

Since the 2016 split, ISIS-WA has led ‘less frequent but larger attacks’ against military targets. This faction is considered to be more active near the border with Niger, in the areas north and west of Damboa and in Yobe State, around Buni Yadi.

In its insurgency, Boko Haram has committed widespread human rights violations across northern Nigeria, such as: suicide bombings, massacres, burning of entire villages, attacks on places of worship and schools, and the slaughter of people in such sites, attacks on IDP camps, cruel and degrading treatment following sentences by its ‘courts’, extrajudicial executions, political assassinations, abduction on a massive scale, including children, forced displacement, child recruitment, grave violation of the rights of women and girls such as slavery, sexual violence, and forced marriages.

Till date, the Lake Chad Basin region is grappling with a complex humanitarian emergency and sanctions will be a great weapon against Boko Haram. Over 3.3 million people have been displaced. More than 200 million Nigerians can use economic sanctions and diplomacy to defeat Boko Haram. If Nigeria cannot defeat Boko Haram with military power, President Buhari should introduce the strong weapon of economic sanction and diplomacy to enable more than 200 million Nigerians to fight countries who are sponsoring Boko Haram through the boycott of their goods. Nigeria can use sanctions as a strategy against countries sponsoring Boko Haram. Nigeria and other ECOWAS countries should impose sanctions on countries that have been identified as sponsors of Boko Haram and other jihadists in West Africa.

The war against Boko Haram can be fought on many fronts: diplomatic, intelligence, covert action, economic sanctions, law enforcement as well as military. Diplomacy, intelligence, covert action, and economic sanctions have historically served as auxiliary measures in wartime. Economic sanctions, in particular, have routinely foreshadowed or accompanied broader war efforts. If Nigeria is determined to bring economic as well as military power to bear in the fight against Boko Haram, the Buhari administration must deploy a variety of economic tools such as preferential trade measures, the application of sanctions coupled with loans to reward allies, and new sanctions to intimidate adversaries who sponsor Boko Haram. In this war, sanctions policy is being used both as stick and carrot, which is a new and welcomed twist.

To eliminate these groups, or persuade them to abandon their objective, sanction would rank as a major policy triumph. The history of economic sanctions amply demonstrates that only military force and covert action can play a decisive role in a battle of this magnitude. At best, economic sanctions can play only a supporting role with respect to terrorist groups.

The UN Security Council officially declared Boko Haram a terrorist group linked to al Qaeda and can impose sanctions against the extremists, who have escalated attacks in Nigeria as they continue to hold schoolgirls and other Nigerians captive. Economic sanctions will be an important step in support of the government of Nigeria’s efforts to defeat Boko Haram and hold its murderous leadership accountable for atrocities. United Nations will help to close off important avenues of funding and weapons to Boko Haram, and show global unity against their savage actions.

Nigeria should name and shame governments, businesses and individuals suspected of sponsoring Boko Haram and recommend a number of new economic measures to choke off the trade in natural resources for weapons.

Inwalomhe sent this piece from Benin.

As Nigeria celebrates its 60th Independence Anniversary, Most Reverend Emmanuel Adetoyese Badejo, the Bishop, Catholic Diocese of Oyo in his message on the occasion…Stifling funding  Stifling funding

Benin monarch, Omo N’Oba N’Edo Uku Akpolokpolo, Oba Square II, has called on the Peoples Democratic Party, PDP, not to turn itself to another godfather to the reelected governor of Edo State, Godwin Obaseki…Stifling funding

Having It All Is a Myth

Of Switzerland, Nigeria and Delta State