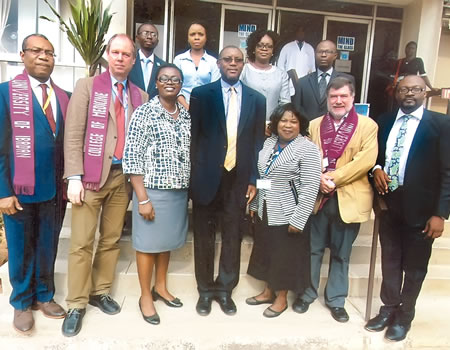 Ensuring a viable neuro-rehabilitation services they said was cost effective and will ensure adequate care can be given to persons that develop conditions that require such a facility to improve their quality of life.

Speaking at the conference, Michael Barnes, Professor of Neurological Rehabilitation, University of Newcastle in his keynote speech stated that neuro-rehabilitation works to ensure the brain recovers quickly.

According to Barnes, there is good evidence for economic benefits for neuro-rehabilitation, adding that it affords patients with neurological disability access to multidisciplinary care.

He said that in the United Kingdom, cost of keeping a person with a neurological problem at home by the UK government had reduced by half because they accessed neuro-rehabilitation services.

Barnes, also founder and past president of World Federation of Neurological Rehabilitation, stressed the need to invest money in neuro-rehabilitation as well as increased involvement of nonmedical disciples.

Head department of Physiotherapy, College of Medicine, University of Ibadan, Professor Kolapo Hamzat decried the shortage of physiotherapists in Nigeria to meet increasing cases of neurological problems in the country.

Hamzat added that due to poverty, many people that require physiotherapy also cannot afford to do so due to  the high cost of such a specialised care.

The low awareness of neuro-physiotherapists and lack of adequate team work among health workers, he said was also a challenge to ensure people with disabilities recover from conditions such as stroke.

While describing stroke as a brain attack, he stress the need for all suspected cases to be rushed early to the hospital to improve their chances of recovery.

Dr Mayowa Owolabi, Director, Blossom Centre for Neuro- rehabilitation, however described rehabilitation as key to achieving one of the goals of sustainable development goals, urging that it should be integrated into other aspects of healthcare.

Owolabi declared that the conference was intended to ignite a process that will lead to development of a national action plan for neuro-rehabilitation services and training.

Understanding A Community Drug Problem: How To Tackle An Epidemic?