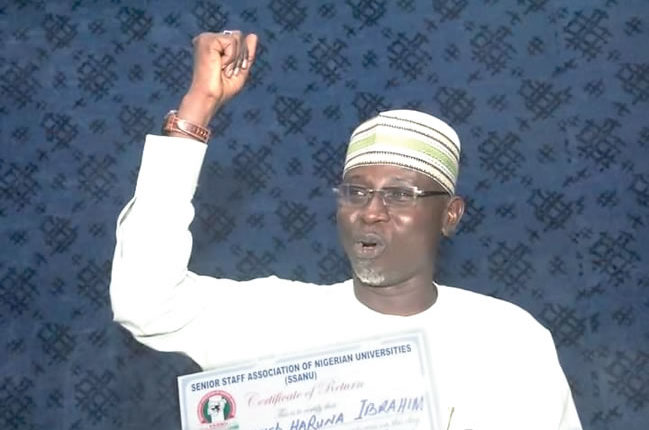 THE Senior Staff Association of Nigerian Universities (SSANU) has elected new members of its national executive for the next four years; following a keenly contested election that ended its 2nd Quadrennial National Delegates Conference held at the NAF Center, Abuja.

Comrade Mohammed Haruna Ibrahim, emerged the new National President of the Union and took over the leadership of SSANU from Comrade Samson Ugwoke, who had led the Union for about eight years.

In his acceptance speech, Comrade Haruna Ibrahim, said the members of the SSANU have used their votes to commit him to the onerous task of rebuilding, repositioning, and retooling this Union.

He said: “You will all agree with me that there are myriads of challenges and toothaches bedevilling the union in recent history. Conscious of our challenging circumstances and the many bitter experiences we have had as a Union, I want to state that the task ahead of us, every one of us, is no mean task.

“It is not going to be a walk in the pack. But it is possible to reposition SSANU; rebuild friendship; forge new alliances; inject patriotism, restore and shore up confidence among the ranks of SSANU membership. Yes, it is possible to start a new beginning.”

The new president added: “On the strength of the above, great comrades, and in furtherance of my promise to run an all-inclusive administration, may I now extend a warm hand of comradely fellowship to my brother, friend and senior comrade: Comrade Solomon Alfa, the erstwhile SSANU National Vice President, North, with whom I share a common vision of a greater, more responsive and beneficial SSANU.

“The past few months have witnessed an intense but peaceful effort on the part of all contestants to emerge victoriously. But today, I declare that we are all victorious; SSANU is victorious. The future of SSANU is assured and bright by the grace of God.

“As I congratulate us on this feat, please be assured that the days ahead of us shall be momentous. In the coming days, the new NAC will unfold a road map that will guide our short, medium, and long term projections. We will no longer walk in darkness. The commencement of the great and golden era of SSANU is now.”