Sanwo-Olu and the Lagos Model (2) 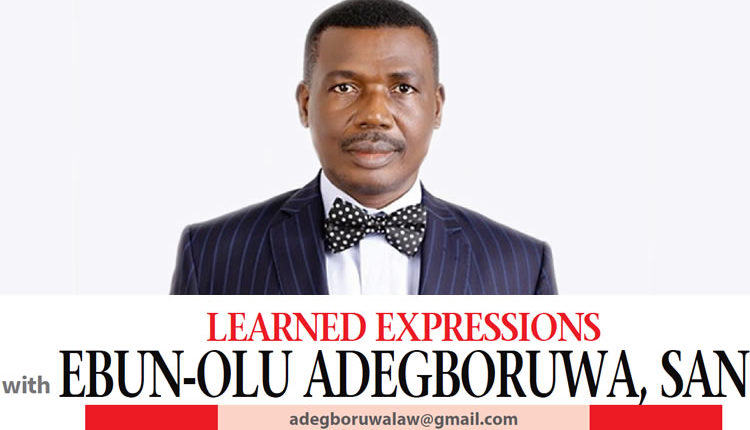 Permit me to first share with you the life and times of a Lagosian who was well respected and cherished. Olatunji Fortunatus Gomez was born on 18 March 1928 and was admitted to the Nigerian Bar in 1961. Fondly and popularly referred to as Pa Gomez, he was a true son of Lagos that defied the powers that be and had his destiny shaped by resistance to colonial indignities. His grand uncle and client, Christopher Alexander Sapara-Williams, was Nigeria’s first lawyer. Sapara Williams died on the 15th of March, 1915 and was buried at the Ajele Stadium (which was then used as a burial ground). Other people buried there include Bishop Ajayi Crowther. Then something strange happened long after his burial. There was a case against the military governor of the State over Ajele Stadium and the government decided to exhume the bodies of those buried there to make way for other constructions and no one was willing to challenge the khaki boys until Pa Gomez took up the challenge with the late lawyer’s daughter, Madam Sapara, who was around 70 years at the time and feared for Gomez’s life. They were successful in getting an injunction restraining the Lagos State government from exhuming the bodies. As a young lawyer, Tunji Gomez ran a newspaper column under the moniker, “It’s a Matter of Conscience.” At the Bar where he practised for over 57 years, this was the identity that defined him. Yet, Tunji Gomez was in reality a leader long before he got to the Bar.

Let me tell you about another Lagosian. The military government of Nigeria was running the country as a unitary enclave by which the commonwealth of the people was nationalized and personalized. Thus, sometime in the 90s, the military regime of General Ibrahim Babangida (retd.) promulgated a law seeking to annex the customary land of the people across Nigeria. A fearless Lagosian, a confirmed patriot, statesman and an erudite lawyer, Alhaji Femi Okunnu, SAN, rose to the occasion. He mobilized the Chiefs of Lagos State at the height of military adventurism in Nigeria, to challenge what was then known as The Land (Title Vesting) Decree of 1992, by which all land within 100 metres of any national waterway became property of the Federal Government. Alhaji Okunnu challenged this law at the Federal High Court and secured a landmark judgment which nullified the decree. Even though Ibadan was at all material times the political capital of the South-West zone of Nigeria, Lagos has always played its role as the hotbed of political activism, where the likes of Pa Michael Imoudu, Dr. Tai Solarin, Professor Bisi Awojobi, Chief Gani Fawehinmi, Chief Anthony Enahoro, Fela Anikulapo-Kuti, held sway.

Lagos was originally conceived as the Federal Capital Territory of Nigeria and it was built and developed to accommodate all shades of people to make it cosmopolitan in nature, hence its famed description as ‘No Man’s Land’. It used to be the seat of the progressives, both politically and indigenously, given the revolutionary fervour of its traditional kings, who all defied colonial oppression even with their lives. You can all well remember the cases of Esugbayi Eleko and that of Amodu Tijani, both examples of the heroic adventures of the Lagos traditional dynasty, confronting oppressive policies of the colonial powers with vigour. Let me share with you one of these cases.

The matter of control over traditional lands in Lagos would end up before the Judicial Committee of the Privy Council in the case of Amodu Tijani, decided in July 1921. The Eleko rallied behind the Idejo Chiefs, led by Amodu Tijani, who had the support of Herbert Heelas Macaulay. For the hearing before the Privy Council in 1920, Herbert Macaulay travelled to London with the Oba’s Staff of Office in support of Amodu Tijani and the Chiefs. While in London, Herbert Macaulay issued a statement claiming that the Eleko was the King of over 17 million Nigerians and in possession of territory more than three times that of Great Britain. Despite a healthy revenue of over Four Million Pounds, he claimed, the British had reneged on a treaty commitment to compensate the Eleko. Embarrassed at being publicly called duplicitous in this way, the British required the Eleko to disown Herbert Macaulay. He issued a public statement clarifying his position on Herbert Macaulay’s statement but declined to disown him through the Oba’s Bell Ringers as required by the colonists.

Unable to secure the support of the popular Oba, the colonists chose to head off rising tension by deposing him. On 6 August 1925, they issued an ordinance de-stooling him and, two days later, on 8 August arrested and removed him into internal banishment in Oyo. Oba Ibikunle Akitoye was installed. His rule lasted an uncomfortably brief three years largely because he lacked the support of the people of Lagos. Indeed, in 1926, he suffered a physical attack. Supported by the elite and people of Lagos, the deposed Eleko took his case to the courts, fighting all the way to the Privy Council who, on 19 June 1928, granted him permission to file a writ of habeas corpus. Oba Akitoye, upon learning of this development and realizing that his claim to the throne was slipping, apparently took his own life 48 hours later in a tragic misadventure. Not forgetting the heroic exploits of Oba Kosoko at various times. In simple terms, Lagos was easily the headquarters of progressive struggles in Nigeria. You could easily settle down in Lagos and be sure of security for yourself and your assets. Ethnic and religious profiling were strange things to Lagos, which accommodated all and sundry. So you had Madam Funmilayo Ransome-Kuti, Olikoye Ransome-Kuti, Beko Ransome-Kuti, Fela Anikulapo Kuti, Nike Ransome-Kuti, etc, all coming as a generation of Egba heroes and heroines who settled in Lagos and contributed in no small measure, to its development.

But there is an emerging Lagos, under Babajide Sanwo-Olu, breeding intolerance, hatred, hostility and ethnic profiling. A Lagos that crows to you as a settler with repeated appeals to pay tax, pay land use charge, pay parking fee and all manner of levies to improve its internally generated revenue and thereafter recedes into its primitive cocoon to describe you as a non-indigene, provoking you to go back to your home state. Without any doubt, the energy and resources of settlers and non-indigenes have been the bedrock of the development of Lagos. Spread across Eti-Osa, Victoria Island, Amuwo-Odofin and other local government areas of Lagos State, the non-indigenes from the South-East, South-South and indeed the Middle Belt and the North, constitute the greater population of Lagos, not forgetting to mention the other neighbouring States of Ogun, Kwara, Ondo and Osun, whose indigenes have become more of Lagos than the Lagosians. Seemingly bereft of any sense of history, there is a new group in Lagos, that is totally anti-democratic and anti-people. It broods no opposition to obnoxious policies, it is shamelessly rooting for dictatorship in authority and it goes about whipping up sentiments to entrench civilian oligarchy.

At the height of the EndSARS protests, Sanwo-Olu appointed himself as the Ambassador of the Youth, he mixed with them freely and even willingly collected their famous 5 for 5 protest-letter to present to the President in Abuja. He became a temporary hero and an inspiration to the youth and a symbol of hope for all lovers of justice. Indeed, it was only Sanwo-Olu who made good his promise to pay compensation to victims of police brutality, by doling out over four hundred million naira as direct payment to the victims. You would then join me to ask the big question: what has happened? What changed His Excellency? Was it the principled opposition of the people to the failed attempt to resume toll collection at the Toll Gates in Lekki? Or the demand for the implementation of the Report of the Judicial Panel on EndSARS? As if reading the body language of a new Sanwo-Olu, some group of persons actually approached the Federal High Court to stop Lagosians from embarking on any form of protest at and around the Lekki Toll Gate. In Lagos? Anti-protest group in cosmopolitan Lagos? Unbelievable as it sounds, it actually happened in Sanwo-Olu’s Lagos. I do support all efforts towards preserving the heritage and monuments that make Lagos unique and I condemn in no uncertain terms any evil policy of destruction of property and assets in Lagos or indeed anywhere else. But should this lead us to the love for dictatorship? By all means no.

I have taken the pains to go back to the history of Lagosians who fought injustice to a standstill, even at the risk of their lives and their thrones. That is the Lagos we all crave and long for, not a city bedevilled with rabid hatred and intolerance, not a city hooked on filth and garbage, held down with traffic and darkness. We call for a new Lagos under Sanwo-Olu, that is built on equality, respect for the rule of law and human rights. We do not want a Lagos that tasks you to the bone marrow and then turns around to disown you. That primitive Lagos cannot birth a Mega City. Eko o ni baje.

Akin Rotimi launches manifesto, website, says no constituent will be left behind