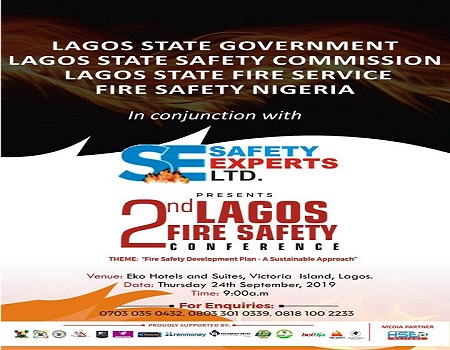 Safety experts have come together to proffer solutions to fire incidents as it is a recurring problem of Lagos state specifically and Nigeria generally.

A Safety expert, Mrs Debbie Windele called for more fire stations to be located strategically across the state.

“You look at the population of Lagos state and number of fire stations we have, it is not enough. There should be more fire stations in strategic locations in the state.

“Look at ikorodu, there is only one fire station on one side of the road. If a fire happens on the other side of the road, how are you going to get there? You now have to turn round and go through all the corners before you get there.

“So, they need more stations by going through the Ibile structure,” Debbie said.

Windele also advocated for a change of cultural reactions to fire incident and sensitization, stating that individuals and organizations should adhere to safety rules.

“There is a need to change the culture of how people react when there is a fire incident. We need to start doing more of the preventive part rather than the operational side.“We need a lot of work and sensitization to be done. Organizations should do a Fire risk assessment and this should be consistent as long as there is any change within the system. They should recycle the amount of diesel they bring in. They should have the right fire extinguishers.

“The Lagos State Government is playing its role effectively in combating fire incident. You have a lot of agencies across Lagos state and there is a lot of collaboration. They are moving in the right direction.

“For individuals, we should have gas and smoke detectors. So, if you have gas in the kitchen, it will be detected” Windele said.

Another Safety expert, Dr Oyet Gogomary, who described fire in many ways, said that poor maintenance practice, gas leak or blow out, and oil spills are some of the causes of the fire outbreak.

The Expert, however, noted that the use of intrinsic safe equipment, following proper work procedure, installation of gas detectors and proper storage and handling of chemicals are possible ways of fire prevention.

Oyet added that others are installation of thunder lightning arrestors, regular, tough and adequate maintenance, use of caution signs and making sure all electrical appliances are switched off when out of the house.

Speaking at the conference, Director General, Lagos Safety Commission, Mr Lanre Mojola noted that the grievous effect of a fire incident in the state birthed the conference, stating that fire outbreak is dependent on individuals and organizations.

He added that sub-optimal management of fire outbreak should be avoided in order to prevent an unexpected recurrence.

“One of the encouraging reasons to organize this conference is the persistent cases of fatal fires in homes and public buildings within Lagos State resulting in loss of lives and property.

“Although dry weather has been identified as the major cause of this worrisome perennial problem, it has however recently progressed to fire outbreaks through storage of petrol in homes and markets, careless disposal of cigarettes stubs, adulterated fuel, power surges, petrol tank explosions, electricity sparks and illegal connection of electrical wires.

“Fire safety is considered to be dependent on individual and organizational mindsets, the vulnerability of the people exposed to the fire, the fire properties of products, the technical fire safety management in the building, as well as the ability of the Fire Service to respond promptly to a fire outbreak.

“Focusing on any one of the above and neglecting others will lead to sub-optimal safety management in the workplace,” Mojola said.

Lanre noted that the Commission will continually promote the development of a strong safety culture within organizations from top to bottom, ensuring that Chief Executives buy into the safety culture and actively promote it within their organisations in order to help drive home the message faster and quicker.

The Director-General Of Lagos State Emergency Management Authority (LASEMA), Mr Femi Osanyitolu harped on a regular meeting of the safety experts in order to continue to discover effective ways of dealing with inferno issues.

Femi noted that Capacity building and conferences of such are relevant in the discussion of fire issues in the state.

While expressing sadness over the consistent fire outbreak in the state, he revealed that five outbreaks were received yesterday, adding that this could have been averted with the necessary safety skills.

Osanyitolu, however, commended the emergency responders on collective efforts in attending to the issues in the state.

She, therefore, lauded the gathering of experts and stakeholders in the exchange of ideas on putting an end to inferno issues in the state specifically and the country generally.