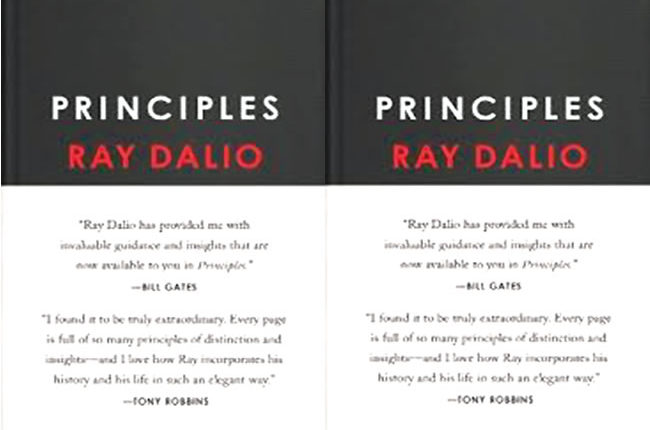 Most people would agree that having principles is important. These can range from religious principles like not eating certain animals to personal ones like not taking drugs or always being honest. However, have you ever thought about using principles to improve your personal success or the success of your company?

Ray Dalio is the founder and former CEO of Bridgewater, an investment management company handling over 160 billion US dollar in assets, which makes it the largest hedge fund in the world. So, clearly the author knows a thing or two about building a successful company. The book itself is divided into three parts. The first part tells the story of the author and how he built Bridgewater from the ground up to the successful company it now is. The second part focuses on principles for personal success, while the third part shows how Bridgewater operates under the same type of principles.

The First Part: A Great Look into the Beginning of Bridgewater

In my opinion, the first part is the least important part of this book. While it is absolutely inspiring to read about how Bridgewater was built and the story of Mr. Dalio, the actual insights I got came from the second and third part of the book. However, the first part allowed me to get a much better understanding about how a hedge found operates. I was also fairly surprised to find out that algorithms and machine learning played a big part in the decision making of the company long before this became common practice.

This is where things start to get interesting. As you might have guessed, the author favors data driven decision making. However, he also manages to show great understanding for the human mind and how people are wired differently, which makes them more effective in certain areas while less effective in others. Dalio manages to pick important topics on psychology and imply them to our everyday behavior, which has the main purpose of helping us make better decisions. Those insights are summarized as principles, which basically offer guidelines to operate by.

By now it is clear that principles play a big role in our daily life and decision making. However, this concept is scalable and can be applied to other areas apart from our own lives as well. Since decision making is a major part of operating any business, Dalio believes it is essential to establish principles in companies, too. The third part of the book gave me a good understanding of what a potential game changer this might be. Being aligned on major points and operating under company principles can lead to not only better decision making, but to better work relationships and overall more effectiveness. Of course, hiring the right people plays a major role since all people inside the company must be in sync with these principles and enjoy working in such a culture. Interestingly enough, Bridgewater tries to do this by again applying insights of psychology and basing their decision on actual data. They do this by using personality tests, such as the Meyer-Briggs-Test, as a fundamental part of their hiring procedure, which allows them to find out the strengths and weaknesses of their potential employees.

This book is one of better books I read so far. Not only does it give actual real-life advice that can be applied anywhere and is written by one of the most successful leaders of our time, but it also manages to combine aspects of psychology with business. Since my studies are focused on business psychology, I believe this book to be an ideal example of what a successful integration of psychology in the business world can look like. Furthermore, decision making is a skill that everyone is using on a day-to-day basis, so improving this skill will not only help people to improve their personal success but also the success inside their companies. I would also like to mention that I purposely did not share none of the actual principles mentioned in the book, as I hope this article will intrigue you enough to pick up a copy yourself.

How branding can boost leaders’ businesses