....Flooding an issue too ― Motorists 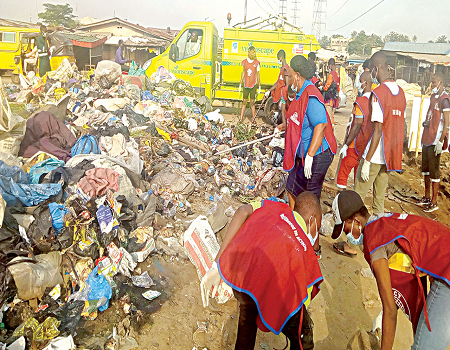 Nigerian Tribune passed through the area on Wednesday, it was observed that many of the refuse has been there for close to a week now.

For some residents, timely clearance of this heaps of refuse would have been the solution, but to them, the situation is not so.

According to Alhaji Adesina Taofeek, “We have complained severally about heaps of refuse being left on the median in-between the roads. Aside from the fact that the refuse defaces the roads, they are also a health risk for people that live not far from the road.

“The rate at which refuse disposer vehicles come in to take them away is not regular. The situation is always worsened once it rains.

“The moment we have torrential rainfall, the whole place becomes flooded because the drainages have been blocked by activities of traders who dump heaps of garbages inside the drainage system.

“At times, when the floods are heavy, the heaps of refuse are always seen floating on the dirty water. It is high time the government do something about flooding and refuse issues around Sango underbridge.”

Also speaking to Nigerian Tribune, motorists, Ishola Haruna explained that there are more heaps of refuse dump inside the drainage systems in Sango than on the roads.

“We don’t have drainage in Sango. The entire length of the drainage system has been taken over by heaps of refuse dumped in then by the traders and street hawkers

“That is why once rain falls heavily, Joju bus-stop down to Ijoko road section of the Sango underbridge is a no go area. The entire stretch of that area becomes heavily flooded,” Mr. Haruna explained