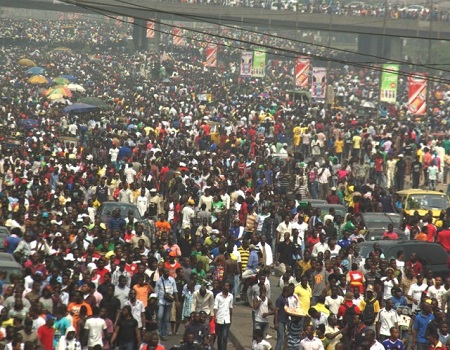 The federal government has been advised to be emphatic on policy on polygamy in the country towards addressing population explosion and national planning.

Delivering a paper at launch of 2018 Nigeria Demographic and Health Survey (NDHS) Report by the National Population Commission (NPC) in Ilorin at the weekend, a lecturer in the Department of Geography and Environmental Management, University of Ilorin, Dr Ismail Oriire, said that rapid population  growth caused majorly by polygamy, has tendency to encourage poverty.

Dr Oriire, who said that previous policy programmes on population and national planning in the country had been in limbo, added that sanction should be enforced on those who flout policy on polygamy when formulated, to address the issue.

He admitted that the issue of polygamy in Nigeria is sensitive due to factors like religious, cultural basis among others, saying that making babies without adequate care and financing could always aggravate poverty.

The university also don pointed at major shortcomings in the 1988 National Population Policy, saying the policy focused mainly on curtailing fertility, “with women forming the only focus for family planning programme, without any reference to the male population.

“In addition, it kept silent on the issue of polygamy termed as a major contributor to rapid population growth and lastly, entire policy was left to moral suasion rather than enforcement.

“Hence, due to this and other perceived shortcomings, the Federal government in the year 2017, formulated the Economic Recovery & Growth Plan (ERGP) with the sole aim of having an effective population management strategy which is aligned with the ERGP, in order to address the issue of high population growth in the country (FRN, 2017).

“Recent Demographic Trends: From all available demographic data, the 1968 mid-year population of Nigeria was estimated at about 112million. With this population and a population growth rate of 3.3% per annum, Nigeria was then the most populous country in Africa; as well as having one of the highest annual population growth rates. The 2006 national census puts Nigerian Population at 140.4million, while projections for the future by the United Nations, point to the fact that the country’s population which was projected to reach the 165million mark by the turn of the century (20th century), about 190.9million (2017); and a UN, 2019 mid-year population estimate of about 201million to be about 203.1million; and by 2050 projected to reach 411million (www.worldometers.info)”, he said.

Dr Oriire said that Nigeria’s high population growth contract sharply with its low growth of productive sectors of the country’s economy; “particularly in manufacturing which is expected to provide avenues for absorbing productive labour. From our increasing population trends, it is obvious that Nigeria faces now and in the near future a looming population problem, which if not properly checked would aggravate the country’s development problems.

“In this circumstance and in the light of social responsibility of government to promote and sustain the nation’s welfare, generating reliable demographic data and implementing the formulated and launched national policies on population aimed at moderating the nations population growth rate, constituted as a major population policy challenge for the country. Note, that the first Four National Development Plans did not consider the country’s population an inhibiting factor in efforts to achieve the objective of a self-reliant and dynamic economy. While the population issue was hardly mentioned in the First National Development Plan (1962-68), the Second National Development Plan (1970-74) took the position that: given the promising resource base the economy is endowed with, the magnitude of Nigeria’s population problem is unlikely to generate or be any cause for alarm or panic.

This posture was maintained in the Third Development Plan (1975-80), where it was maintained that increasing population growth rate did not appear yet to be any cause for panic or obstacle to sustained economic growth.

“However, the need for the adoption of a well-focused population policy, based on adequate population census data finally acknowledged in the 1981-85 Fourth National Development Plan.

With the end of the oil boom era in 1981 and subsequent economic depression of the 1980s necessitating severe austerity measures and the Structural Adjustment Programme (SAP), it became inevitable to take a more drastic view of high population-related problems. This, therefore, culminated into the adoption of a National Population Policy for Development, Unity, Progress and Self-reliance of the nation in 1988.