PDP chair: Who does the cap fit? 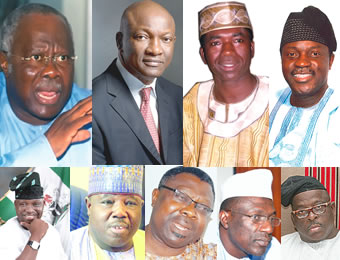 HAKEEM GBADAMOSI, who has been following the political intrigues trailing preparations for next Wednesday’s national convention of the Peoples Democratic Party (PDP), peeps into the camps of the contestants for the position of national chairman.

IT is no surprise the battle for the soul of the main opposition Peoples Democratic Party (PDP) keeps taking different shapes and forms by the day. What is astounding to many is the role of some major gladiators, who have held on tightly to each others’ throat despite interventions from leading stakeholders in the ‘largest party in Africa.’

At a stage, the two factions of the party had declared that only an intervention of members of the Board of Trustees (BoT) could guarantee a seize fire. But the warring factions have stuck to their gun after the body waded into the acrimony. Neither have the factions sheathed their swords after former President Goodluck Jonathan, presumed to be the leader of the party, received BoT members at his Abuja residence and sued for peace and reconciliation. Even the reconciliatory move made by the Professor Jerry Gana appears to have had little or no effect with the faction under the chairmanship of Senator Ali Modu Sheriff giving stringent conditions for truce, just a week to the rescheduled PDP national convention in Port Harcourt, Rivers State.

Despite the discordant tunes surrounding the convention, contenders for key national offices have been upbeat in their campaign. Either through personal contact or by proxies, the contestants for the position of national chairman in particular have stepped up their game notwithstanding the schism in certain quarters concerning the race. The initial controversy over the zoning of the post to the South has taken many dimensions, because of the caveat included by the PDP headquarters. There are still issues after leaders of the PDP in the South resolved to cede the position to the South-West, where the zonal leaders later rezoned it to Lagos and Ogun states. Lagos so far has two leading contenders for the position: Chief Olabode George and Mr Jimi Agbaje. However, Professor Taoreed Adedoja from Oyo State and Professor Tunde Adeniran (Ekiti) have vowed to press on with their aspiration as both have obtained nomination form for the chairmanship position.

He has paid his dues in the politics of the country. A founding member of PDP, Chief George remains an indisputable pillar of the party in the South-West nay Nigeria. He rose to become an elected deputy national chairman of the PDP. But his remarkable feat was leading the PDP to win four of the six states during the 2003 general election. Since then, the party has been suffering serious setbacks in major electoral contest in the South-West. It also to his credit that most of the younger  promising political figures in the zone today owe their coming to limelight to his support and influence in the political circle, as he represents the veritable bridge-builder between the North and the South.

A powerful speaker and fearless politician, George is believed to enjoy the support of most PDP leaders across the six geopolitical zones in the country in his quest to become the substantive chairman of the party. He is confident that PDP would rise to regain its lost glory of governing party, citing the experience of the Labour Party in the United Kingdom. He said, “Once an election has been won and lost, once a new leadership enters the fray, the greater good of the nation must then be the driving force of all contending ideologies. Debates will never stop. The contest of ideas, the storm and tempest of ideological differences must now be articulated in a new patriotic frame and national balance. I do not say the opposition should roll over and die. I do not say the opposition should withdraw into lethargic indifference and accommodate the new order without contemplative engagement. No.What I am suggesting is that every nation is about renewal and change. Every nation is always a perpetual work in progress. It is never about a permanent arrival. It is always in constant fluidity as political actors perpetually contest for public space and dominance.

“Take the seemingly endless travails of the Labour Party in the United Kingdom. When Baroness Margaret Thatcher defeated Lord James Callaghan in 1979, the Labour party was flung into an unbroken 18 years in political wilderness. No doubt, the several years in the political limbo would have been full of severities and dramatic challenges for the Labour Party. But through the ebb and flow of the downward turn in the party’s fortunes, there was no insistence that without Labour that the country must be forfeited. There was no clamour that the nation must tumble into ruin and destruction unless Labour is restored! Labour was in perpetual vigilance and unceasing positioning of its ideals. Yes, the party never remains the same. It keeps evolving to attune to the confronting realities. Principled men and women remain forever at the political barricades, engaging the presiding Conservatives with the purest of motives and the noblest of patriotic vision,” he said.

Cool and calculated, Professor Adeniran has been in the political circle since the military era. He was among the brains behind the political re-engineering that culminated in a number of remarkable reforms in the country. The former Minister of Education was at the helms of affair of the PDP machinery that produced former President Goodluck Jonathan ass the standard bearer of the party in 2011. The Ekiti State-born politician is said to have the backing of PDP stalwarts in the Northern and Southern parts of the country.  According to a media man of Ademiran, Honourable Taiwo Akeju, part of the resume of his principal includes: Member, Political Bureau, January 1986-March 1987;  Member (Presidential Representative), Nigerian Delegation to the 40th Session of the United Nations, October-December, 1985; Secretary/Director, Directorate for Social Mobilization (MAMSER), 1987-1992; Chairman, Directorate for Social Mobilization (MAMSER) January-August, 1993;Member, Committee on Nigerian National Defence Policy for the year 2000, (1997); and Hon. Minister of Education, Federal Republic of Nigeria, June 1999-January 2001. Adeniran was chairman, Presidential Inauguration Committee of President Olusegun Obasanjo in May 1999 and Nigerian Ambassador to the Republic of Germany between 2004 – 2007. He also served as Chairman, 2011 National Convention of PDP in 2011 that produced Dr. Goodluck Jonathan as the PDP flag bearer in 2011 Presidential Elections, as well as the deputy Director General of the Presidential Campaign organization (Jonathan Sambo) in 2015.

In one his observations on the democratic structures in the country, Adeniran once said: “We need to strengthen them. For now there are three areas I believe we need to go into serious engineering: the political parties should be revamped, restructured and reoriented. Secondly, the State Assemblies do not seem to understand or appreciate why they exist. The third issue is Local Government administration. Some see it as a colossal waste but I consider it a potentially good instrument of development that is being currently terribly abused as a tier of government. It represents something altogether different from what it ought to be. It is sad. Our Local Government system is one of the most tragic aspects of the democratic process.”

He has been consistent in the contest for key political offices, among them, governorship, national secretary and now national chairman. The erudite scholar, who is believed to have produced more than 20 professors in the nation’s ivory tower, says he is the best man for the position of national chairman because of his non-alignment to any PDP faction. He is fluent in the Hausa language, having been born in Kano, worked for than 30 years in different parts of Northern Nigeria, as well as Edo and delta states in the South-South geopolitical zone.

A pharmacist, Mr jimi Agbaje took the political scene like a thunderbolt. A crowd puller and compelling speaker, his personality turned around the birth and acceptance of the each of the party he has identified for many years. His quest for the governorship seat has added pep to the politics of Lagos State and the country through his well-coordinated campaigns based on issues, coupled with erudition and depth during political debates. He is a major driving force in the mainstream Yoruba organization, Afenifere.

The apparent ambiguity in the pronouncement of PDP over the zoning of the key national offices has sustained the campaign by a media mogul, Chief Raymond Dokpesi to vie for the chairmanship. It has in a way also fired the political intrigues and horse-trading among the major political caucuses in the South-West, which is the only zone in the country that has never produced the national chairman of the party. The need to forge unity ahead of the convention propelled the governors of Ondo and Ekiti states: Dr Olusegun Mimiko and Mr Ayodele Fayose to summon a meeting of South-West PDP stakeholders in Akure, Ondo State last Monday. The plan was to produce a consensus Chairmanship candidate. But the meeting ended in a deadlock, thus the setting up a six-man committee to look into a way out of the seeming logjam.

Prior to the meeting, PDP in the region has been swimming in crisis with many interest and agitations by stakeholders which has polarized the party in the region while leaders continue to flex muscles and failed to reach compromise.

The mood of the two governors who convened the meeting indicated that it was no tea party for the stakeholders in trying to pick a consensus candidate among the aspirants of the party.  They were only able to relocate the positions zoned to the South-West among the six states in the South-West, with the post of national chairman going to Lagos and Ogun states.  The leaders stated: “We have zoned equally the treasurer  to Ekiti and Ondo axis while Osun and Oyo will pick the National Publicity Secretary of the party. The key issue is the unity among our leaders and the teeming followers of the PDP, in view of very difficult situation and for us to provide quality opposition to the APC government at the center and to ensure that Nigerians are not scheme out.”

However, despite the decision of the leaders and stakeholders to re-zone the three positions, some of the aspirants not favoured by the arrangement openly registered their intention to contest for the chairmanship position.  Both Adedoja and Adeniran equivocally declared their intention to forge ahead with aspiration, in spite of not coming from either Lagos or Ogun states. .

Some zonal executives led by Makanjuola Ogundipe, also vehemently opposed the gathering, describing the meeting as unconstitutional before he and others headed for Ibadan, Oyo State to actually counter the Akure meeting. Findings showed that the assignment of the ‘committee of six wise men’ set up in Akure by the PDP stakeholders and headed by the former national vice chairman of the Party, Alhaji Yekinni Adeojo, ran into hitches. His team was mandated to consult with all the aspirants with b the hope that one of them could be allowed to be the consensus candidate from the zone for the post of national chairman. A foremost traditional ruler in Lagos State was reportedly contacted to intervene so that Lagos could come up with a sole candidate for the position. But no compromise was reached despite the frantic efforts made by Senator Kofo Bucknor-Akerele, a member of the Adeojo Committee, who made the contact.

With about five days to the convention, the question among many observers and PDP stakeholders across the country and beyond is, who does the cap fit in the among the contestants for the position of national chairman in the party? Can the South-West PDP stakeholders resolve their differences before then?

Why I am known to heal with comedy —Dr Frick