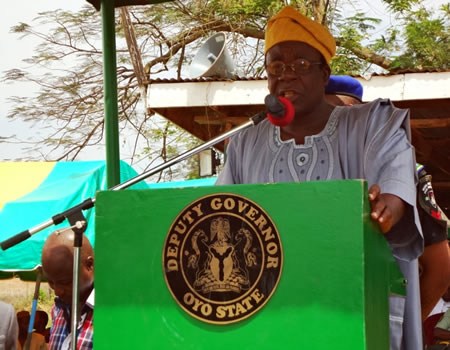 The Oyo State government has promised to support affected residents of Tuesday’s flood in the state, assuring that there would be prompt repair of roads, culverts and drainages affected by the flood.

Otunba Adeyemo warned residents to stop dumping refuse on water ways, noting, “It is unfortunate this has happened despite many numerous preventive measure put in place by the government which include dredging of rivers, urban renewals and plans and various sensitisation programmes. Despite this, some of our people have not stopped the habit of dumping refuse indiscriminately.

“However, we will not rest on our oars and our government, being a responsible one will provide succor for the affected people and commence repairs of roads, culverts and drainages. We hope to complete the repairs before the end of this year,” the Deputy Governor explained.

Otunba Adeyemo admonished residents to play their role in avoiding a reocurrence of this natural disaster by adhering to environmental laws and patronising Oyo State government registered waste disposal agents, warning that house owners at river banks should relocate or leave their residences during heavy downpour

He lamented the unprofessional attitude of some Structural Engineers who do not leave set-backs before construction of buildings and consequently called for professional building ethics to ensure those due processes are followed during constructions.

Commissioner for Environment and Water Resources, Chief Isaac Ishola advised residents in the state to desist from dumping refuse in drainages and water ways, pointing out that these acts largely contributed to persistent flooding in the State.

In his words, the representative of National Emergency Management Authority (NEMA), Abuja, Mr Yakubu Sulaiman promised NEMA’s readiness to always support the State as it has done in the past, assuring that the agency will continue to fulfill its obligations to the people of the country.