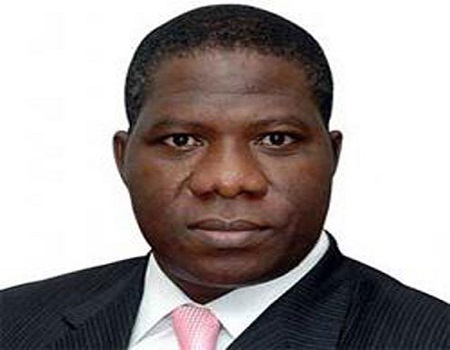 A former member of the House of Representatives Michael Opeyemi Bamidele has formally joined the race for the Ekiti Central senatorial district seat.

Bamidele, who served as the Director General of the Kayode Fayemi Campaign Organisation, has recently returned from England where he was taken for treatment after he was accidentally shot.

Bamidele, who had also served as a former Commissioner for Information in Lagos State, represented Ekiti Central Federal constituency 1, in the House of Representatives in 2011.

With this declaration, the former federal lawmaker will slug it out with another contestant and the present occupant of the seat, Senator Fatima Raji-Rasaki in the primary.

Rasaki defected to the All Progressives Congress (APC) prior to the July 14 governorship election due to lingering crisis between her and Governor Ayodele Fayose, the leader of the Peoples Democratic Party (PDP) in Ekiti State.

At the official declaration where top hierarchy of party from the five local governments that constitute the district held at his Iyin Ekiti country home on Wednesday, Bamidele said he decided to seek higher position for him to be able to impact positively in the lives of the populace.

He added that he was ready to accept whatever modality the party would adopt to conduct the primary, in line with the doctrine of party supremacy that is gradually gaining traction in APC with the emergence of the incumbent National Chairman, Mr Adams Oshiomhole.

“As a core and incurable APC loyalist, I am comfortable with direct, indirect and consensus options. The party is supreme and I am ready to key into whatever option to be applied to pick the candidate in my district.

“But if my people deem it fit to honour me as a consensus candidate considering my past and present contributions, I will be eternally grateful to them.

“My belief is that, whichever option we adopt, people will still have the opportunity to either vote or make inputs and that is what democracy is all about; it is participatory.

“I will still remain committed to deeds and actions whether the result comes out to be positive or negative at the end of the day. Even the fact that God preserved me after the June 1 shooting incident, where I escaped death showed that I was specifically made to serve the people,” he stated.

Bamidele, who commended the party faithful for their outpouring of love after his shooting travail, said: “I started the race to the Senate in 2011, but God didn’t allow it to be then, because God’s time is the best.

“That incident had taught me a new lesson, so I will adopt new approach to serve the people more, by being more humble and more dedicated to serving humanity,” he pointed out.

Bamidele stated that he was banking heavily on his past indelible records in the House of Representatives to be able to clinch the party’s ticket and wins the general election and not relying on manipulation or arm-twisting of other contestants.

“During my time in the lower chambers of the National Assembly, where I represented Ado/Irepodun/Ifelodun Federal constituency, I did my best in terms of employment generations for the youths, building of ICT centres in Ado, Iyin and Igede Ekiti.

“Added to that was the ultra-modern Health Centre I built in Ado Ekiti, the Library in Iyin and Igede Ekiti, among other empowerment programmes I did that touched the lives of over 75,000 people in just two local governments.

“In spite of the fact that I represented only two councils then, I helped many other people from other local governments in the district and even across the State and that I shall continually do if given the opportunity this time around.