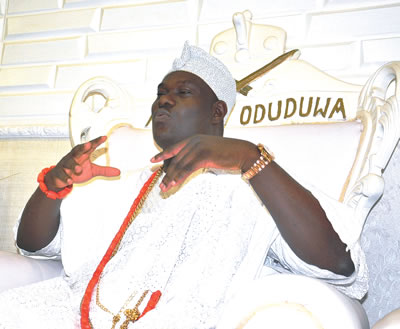 THE Ooni of Ife, Oba Adeyeye Ogunwusi, has promoted the immediate Jaaran of Ife, High Chief Adekola Adeyeye, as the Second- in-Command.

Mr Moses Olafare, the Director, Media and Public Affairs, Ooni’s Palace, said Adeyeye is now the third on the order of the hierarchy of Ife traditional council, (Ooni-in-Council).

Olafare in a statement issued on Tuesday in Ile-Ife, said that the new position was the reward for loyalty, commitment to service and dedication to Ife Kingdom.

According to Olafare, the monarch described Adeyeye as patriotic Ife indigene and great loyalist of the throne of Oonirisa, which he had served meritoriously for 30 years in various capacities.

He said that the new Lowa of Ife started his full service at the palace in 1987 when he was seconded to the palace as an Emese (Traditional emissary) of Ooni.

Olafare said that Adeyeye who succeeded the immediate past Lowa Joseph Ijaodola, who died on Jan 27, 2017, rose through the ranks of Emese to become Sarun Oodua (most senior Emese) until 2013.

“The then late Ooni Okunade Sijuwade, Olubuse II, made him a kingmaker as the Aguro of Ife, the position from which he was promoted to Jaaran two years ago.”

Olafare said that the new post was in line with the tradition of Ile-Ife as established by Oduduwa.

The News Agency of Nigeria (NAN) reports that the Ife Traditional Council is headed by the Ooni with 16 members of two groups namely: right side (APA Otun) and left side (Apa Osi).

The right side known as “Agba Ife” is known as elders of Ife and comprises of eight members, led by Obalufe of Iremo quartets.

NAN also reports that the left side is known as “Modewa” led by Lowa, next to Obalufe on the order of hierarchy of the Ooni-in-council.