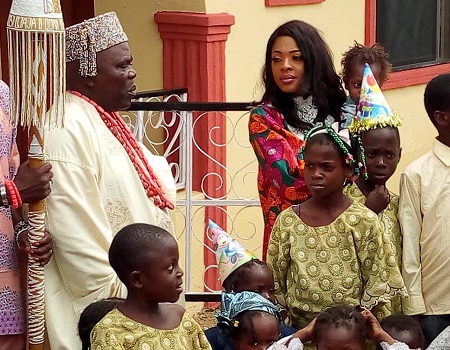 THE Ooni of Ife, Oba Enitan Adeyeye Ogunwusi has donated new building structure to Oluwakemi Orphanage Home in Ibadan, Oyo State, saying the development was parts of his commitment to providing support to the less privileged in Nigerian society.

Oluwakemi Orphanage home was transformed by Ooni of Ife through his Hopes Alive Initiative(HAI) a Non-Governmental Organisation (NGO) established as a supportive institution to the less privileged individuals, orphanage homes and other related bodies in Nigeria.

This was contained in a press release signed by the director of media and public affairs to Ooni, Comrade Moses Olafare, which was forwarded to the Nigerian Tribune in Osogbo on Tuesday.

According to the release, “the orphanage home which was hitherto being run in an unconducive facility around Omi Adio area of Ibadan was relocated to a new building fortified with modern facilities and equipment at Ladeowo area in Ido local government for better living of the orphans by the monarch through the initiative.”

Ooni Ogunwusi who was ably represented by the Agboju of Agbaje-Ife, Oba Adekunle Adebowale maintained that creating an enabling environment for the less privileged people in the society will give them an assurance of a better future and help the society to a large extent.

While expressing concern over the plight of the underprivileged people especially youths and children, the monarch assured that he would not relent in his committed efforts towards giving caring for the needy and rekindle their hope for the future regardless of their condition.

Why we launched ‘OjajaMore’ —Ooni of Ife

The Deputy Convener/CEO of Hope Alive Initiatives Miss Temitope Adesegun said Ooni Ogunwusi had introduced the initiatives to meet the needs of the less privileged, stressing that the monarch was poised at ensuring they live and function better in the society despite their challenging situation and shortcomings.

“This promising task requires collaborative efforts of all and sundry. His Imperial Majesty has established HAI to meet the need of the orphans and less privilege with a view to ensuring they live and function better in the society despite their challenging situation and shortcomings.
hence the need for others to support the initiatives pertinently required. Temitope Adesegun said.

“It’s a big umbrella for all NGO’s and foundations to come under to have what they need, we advocate for the less privileged ones, supporting them the best way we can to give their life a new beginning,” Adesegun remarked

The operator of Oluwakemi Orphanage Home, Mrs Victoria Adeleke, emphasised that she was caught unaware of the kind gesture of the Ooni, just as she charged eminent Nigerians, corporate organisations to emulate the traditional ruler.

She stated that ”God would continually bless our father the Ooni of Ife as he has brought comfort to the helpless in our care, I also want to use this opportunity to solicit support from wealthy members of the public to assist us, we need money to support the children’s education, pay workers salaries, we also need food item and other materials which Kabiyesi Ooni has also promised to constantly do for us through this HAI.”