….Asks the appellate court to set aside his conviction 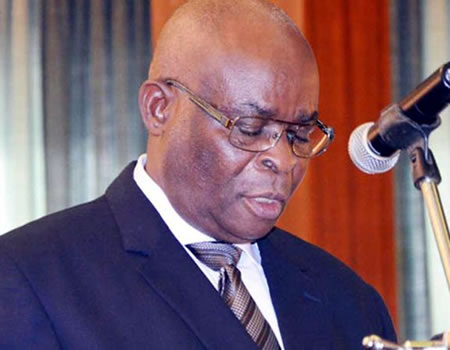 Justice Walter Onnoghen has rejected the judgement of the Code of Conduct Tribunal (CCT) which convicted him on the six- count charge of false declaration of assets preferred against him by the Federal Government.

Shortly after the judgement delivered on Thursday, Onnoghen, through his counsel, filed a notice of appeal at the Court of Appeal, Abuja Division, challenging the judgment of the three-member panel of the Tribunal.

In the notice of appeal which has the Federal Government of Nigeria as the only respondent, Onnoghen said the CCT erred in law when it dismissed his application challenging its jurisdiction and thus, occasioned a grave miscarriage of justice.

He added also that the Tribunal erred in law when it dismissed his application seeking the chairman to recuse himself from further proceedings on the ground of bias.

He argued in the particulars or error that he was not, at the time the charges were filed against him on January 11, a judicial officer and was not subject to the jurisdiction of the Tribunal and that, it is only the National Judicial Council (NJC) that has the power to discipline him for misconduct.

“That the CCT chair erred in law when it refused to recuse himself from the proceedings in view of the declarations by the chairman that he is only accountable to the president, who appointed him an nobody, because he is not a judicial officer and thus, occasioned a miscarriage of justice.”

According Onnoghen, the CCT erred in law when it held that he confessed to the charges against him by admission and use that as a basis to hold that he did declare his assets from the her 2015 when he became a justice of the Supreme Court.

He also argued that CCT erred in law when it ordered that his assets be confiscated when he has resigned his appointment since April 4, 2019 and no longer a public officer capable of being punished for any wrong doing.

Part of the notice of appeal hinged on 16 grounds read, “Take notice that the appellant herein, Justice Onnoghen Nkanu Walter Samuel being dissatisfied with the rulings/judgement of the Code of Conduct Tribunal, Coram Danladi Umar (Chairman), William Atedze (Member I) and Julie A Anakor (Member II) delivered on the 18th of April, 2019, wherein it ruled on the application challenging its jurisdiction and to recuse itself from the proceedings as well the judgement on the substantive matter against the appellant, do hereby appeal upon the grounds set out in paragraph 3 hereof and will at the hearing of the appeal, seek the reliefs and orders set out in paragraph 4.”

Justice Onnoghen, however, sought an order of the appeal court allowing his appeal and that the CCT lacked the jurisdiction to entertain the case.

He also asked the appellate court to set aside his conviction as well as discharge and acquit him, among other prayers.

The Tribunal had convicted Justice Onnoghen and removed him from office as the Chief Justice of Nigeria (CJN) and Chairman of the NJC.

It also banned him from holding public office for the next ten years and ordered Onnoghen to forfeit all the money in the five accounts he maintains with Standard Chatterred bank, Wise II, Abuja, which he failed to declare between 2009 and 2015.l ti the federal government

The Tribunal held that the government proved beyond reasonable doubt that Justice Onnoghen breached the Code of Conduct for Public Officers.

Of police, youths, phones and liberty