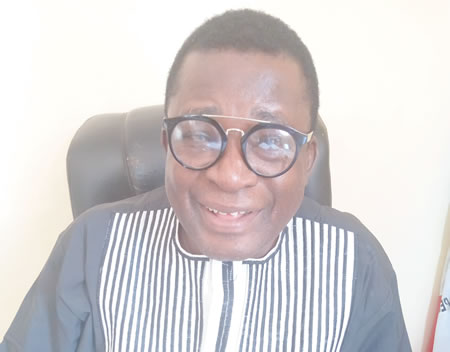 In this interview with ‘YOMI AYELESO, the chairman of the Peoples Democratic Party(PDP) in Ekiti State, Chief Gboyega Oguntuwase, explains that the defection of former governor in the state, Chief Segun Oni, to the party was long awaited and that it would boost the chances of the main opposition party ahead of the 2022 governorship election.

HOW did you receive the news that a former governor of Ekit State, Segun Oni, has concluded plans to join the state chapter of the Peoples Democratic Party (PDP), six years after leaving the party?

I am not surprised because this was a longawaited decision. We believe that a revolutionary person with a track record of integrity like Chief Segun Oni has no business, in the first place, being with the All Progressives Congress (APC). When a former president, Chief Olusegun Obasanjo and a host of other nationalists detached themselves from the principles of the president of the Federal Republic of Nigeria, Muhammadu Buhari, you must then know that the likes of former governor of Osun State, Prince Olagunsoye Oyinlola and Chief Oni had their days numbered in the APC. You should know that the party is nowhere to be found again.

I don’t want to talk too much on how the APC treated our able leader (Oni) but his decision to leave the party and return to the PDP is a long awaited decision. Let me end by saying that almost 70 per cent of his aides and supporters got absolutely disinterested in and with the APC before Segun Oni now defected from the party.

What has changed in the PDP that is making him to return to the party he accused of lacking internal democracy six years ago?

There is one that I really want to tell you and which I want to make clear to you that the PDP is not a stagnant political organisation. You know that one of the key issues raised during the last convention of the party in Abuja was that we must encourage internal democracy. We must also discourage imposition and operate an open door system that would accommodate those that had protested against us and who were ordinary members of the party. The reason for all these is because we are a very responsive and highly organised political party. This explains why you see people like a former governor of Kano State, Senator Rabiu Kwankwaso; governor of Sokoto State, Aminu Tambuwal; former president of the Senate, Senator Bukola Saraki; a former Speaker of the House of Representatives, Honourable Yakubu Dogara and several prominent others have joined the PDP before now. I believe and I want to say it here that there are more improvement going on in the party and this has made us and the ordinary man to believe that those who initially took an adventure in the APC know that the PDP is much better. I can assure you that things are getting better and the PDP is very responsive to the complaints of even the ordinary members of the party.

Don’t you think the return of Oni and his supporters across the 16 local government areas of the state to the PDP will alter the initial political arrangements in the party?

Given his personality and the respect he is said to command in the state, there is an insinuation that he had an agreement to get the party’s ticket for the 2022 governorship election before joining the party. Can you confirm if there is such an agreement?

I am a historian and I am also a lawyer but I am never a prophet. I have not seen the revelation of what he is coming to do in our party. But the former governor said to me that he is coming to make the party stronger and that he has the competency to win the 2022 governorship election in the state. However, as to narrowing down the issue to whether he wants to contest the governorship election or not, I have not received the revelation because he has not told me that. Maybe because I am a little boy from a small village in Ikole-Ekiti, but I still believe that I am the chairman of the PDP. I want to tell you that radical politicians like Oni will not be coming with the 100 per cent mindset for the party to surrender the ticket to him. You know that the man is not a desperate person; he is a man with good culture and sound academic background. He is quite different from some people with little educational background.

Obviously, there are some tendencies that have split the party into two groups linked to former Governor Ayo Fayose and Senator Biodun Olujimi at the moment. Which of the two groups do you think Oni is talking to over his defection to the PDP?

Oni is talking to everybody and every reasonable politician must talk to him. Senator Olujimi must talk to him; former Governor Fayose must talk to him and I, as the chairman of the party, must talk to him. On the other hand, Oni must talk to us. There must be a broad discussion; a discussion that is genuine and dynamic that will make the PDP a better and stronger party should be encouraged; it is normal. I want to tell you that all these discussions will result to more people coming into the PDP because we are not afraid to have more bigwigs in the party. The PDP is big enough to accommodate them all.

Do you see the defection of the former governor as opening the door for more defections from the APC to your party in the coming months?

I am not a prophet of doom, but I am saying that if the APC does not look at ways and means of appeasing those who may not entirely agree with the policies and principles of my brother and good friend, the governor of Ekiti State, Dr Kayode Fayemi, what happened in the PDP then, may happen to the APC. That is, if the people are not appeased, they will be on their way to the PDP in the next few months.