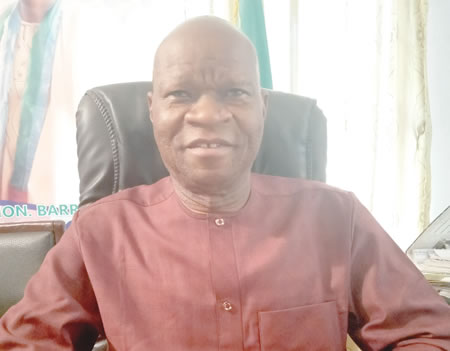 The chairman of the ruling All Progressives Congress (APC) in Ekiti State, Mr Paul Omotosho, in this interview by ‘YOMI AYELESO explains that the defection of Chief Segun Oni would have no negative impact on the party in the state.

WHAT is your reaction to the defection of a former governor of Ekiti State, Chief Segun Oni, from your party, the All Progressives Congress (APC), to the opposition Peoples Democratic Party (PDP)?

The move was long expected. We knew he would surely leave; there were signs he was going to leave. So, his defection from the APC was not strange to us at all. Like I have been saying, his exit from the party is a non-issue to us. We expected his defection.

He alleged that he was unfairly treated in the APC throughout his six years stay in the party. Was this the case?

I want to say this again and again that Oni was adequately and fairly treated. You know he came from the PDP then. Before he got to the APC, a very good position was already made available for him and by the time he joined our party, he immediately became the deputy national chairman of the party. That is to tell you that he was coming to reap where he did not sow. That time, the party did not give him unfair treatment. He was the APC deputy national chairman for years. He personally and voluntarily decided to resign and contest the governorship election primary and clearly and glaringly lost to Dr Kayode Fayemi. And for your information, there were about 33 persons who contested with him (Fayemi). After the election, Fayemi reached out to all the contestants and they agreed to work with him, a result which was achieved.

As soon as that happened, Chief Oni went to court against Fayemi and the APC. He was not challenging the results of the governorship primary of the APC; he was not contesting the general election. He was contesting the eligibility of Dr Fayemi on two grounds: firstly, that Fayemi did not resign his appointment as a federal minister and, secondly, that Fayemi had been indicted by a White Paper which was orchestrated to demean the integrity of the governor by the PDP administration of former Governor Ayo Fayose who never wanted him to contest that election. The PDP went to the tribunal and Oni also went to court on the same grounds the PDP was canvassing.

The APC, ordinarily, knew what to do before Oni went to court, in accordance with the constitution of the party. But we wanted him to have the fair hearing he was talking about that he wants to put democracy to test and eventually democracy demonstrated that it exists. He lost the case in court and shortly, he had problem with the party in his ward at Ifaki where he was suspended from the party for anti-party activities and other issues. When we got wind of this as a party in the state, we invited those involved because we received a letter from them to that effect. We gave a date for those that were aggrieved and before that date, a letter had been sent to the national headquarters of our party over the same issue of his suspension by a group of people alleging in the said letter that Dr Fayemi and the APC in the state were behind the suspension. Since that matter went to the headquarters and the Ekiti APC was alleged of complicity then, it is beyond our jurisdiction because we cannot act as judge in our own case. We now waited for the headquarters to get the matter resolved. But unfortunately the national secretariat did not do anything up till now.

He also alleged that his own people within the party were not fairly treated in term of appointments. Do his followers enjoy government patronage in that wise?

The way I understand politics, if you are coming from a different party and you want to join a new party, what I think you are expected to do as soon as you declare your intention in that party is to forget the identity of the older party that you left. Oni came to the APC with his people and they were fully integrated. It is strange for him to identify somebody as his own follower and not as a follower of the APC. Every member of the APC is a member of our party and such persons will be recognised on that ground. How will Fayemi say these are his people or how will Oni be telling us that these are his own people? Then, every leader in the party will now be saying some people must be answerable to them. If he is insisting that his followers are not fairly treated, that is to tell you he was with us nominally; that he was sponsoring a group within the APC and this was unknown to the party. But he has actually said it now. He came to the party; ditto Prince Dayo Adeyeye. The latter was offered a senatorial ticket on the platform of the party and which he won at the poll.

Shortly after the governorship primary, Dr Fayemi personally went round to see all other aspirants, including Oni. On behalf of the party in 2019, Fayemi offered him the senatorial ticket for Ekiti North which he rejected because he knew he was going to court and relied on his victory in the court which, of course, will never come. He said he was not interested and that was the ticket given to Senator Adetunmbi today. How best could he have been treated if he was coming to the party and the first thing he grabbed was the highest position and at the same time, contested and, the moment he lost, he was offered the senatorial ticket for the Ekiti North which he rejected because he wanted to have the governorship seat at all cost? If he is saying that his followers were not recognised or not treated the way he wanted, I want to simply say that is very incorrect. There are so many of his supporters who have got appointments and are doing well in this government and even in the party as well.

Don’t you think his defection will adversely affect the fortune of the APC in Ekiti, knowing full well that he is a former governor and will have supporters across the state?

The answer is no. When he was coming, what was the spectacular thing that he brought to the party? While he was with us for over four years, he should tell us what he did for the progress of this party. In his home town at Ifaki, when he came, were we able to win elections there? And as a former governor like you said, in the course of his exit from the PDP to the APC, did he put into extinction the existence of the PDP in that place? The PDP was flourishing when Oni was with us in the APC, including the two wards in Ifaki. Like I said, and I have to say it again without any apology, when he was with us, he did not occupy any space and so no vacuum can be created by his exit. He was the APC deputy national chairman, he should tell me the impact he made on the party in Ekiti State. What was he able to do for the people? How many people was he able to empower?

Do you see him as a threat if he gets the governorship ticket of the PDP in 2022?

He is not a threat and he will never be a threat to us in the APC. We are waiting for him, and if he eventually emerges as their candidate in 2022, he is going to meet his political waterloo. We are prepared and the APC is no longer going to be the way it was. We pray they pick him and that is even if they are going to pick him. The PDP is polarised at the moment; the party is finished in Ekiti and Oni will not understand that. In fact, that he is going to the PDP, is he sending others in the party to oblivion? It is good that he has gone to the PDP and that actually gives us breathing space to really know how to buckle up.