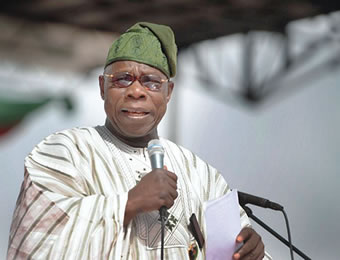 He said this while hosting the new president of ECOWAS Commission, Marcel Alain De Souza, at his Hilltop residence, in Abeokuta, the Ogun State capital.

Obasanjo said the development would engender growth in the communities with about 320 million population.

He promised to continue offering services for ECOWAS when duty beckoned on him to do so, adding that the over 320 million people must be developed in all areas of human endeavours.

The former president expressed displeasure over the slow rate of development being witnessed in many African countries because of internal conflict.

He said the communities lacked political will to move the sub-regional organisation forward since its establishment 41 years ago.

“Let me emphasis that 41 years ago, ECOWAS was established and the expectation of all of us was very high. I think we will not be fair to ourselves if we do not say the truth that we have not moved fast based on our expectation.

“As you have rightly said, there are issues that have come up that were not expected. I think again, we must tell ourselves the truth that there has not been enough political will on our part to move that sub-regional organisation as far as we should have done.

“We never expected that internal conflicts will engage the attention of ECOWAS as much as it has engaged our attention in Sierra Leone, Liberia, Mali, Guinea Bissau and Cote’d’Ivorie, just to mention but a few.

“The attention that we should have paid to the original objectives which is economic integration, economic development, socio-economic progress. We have been diverted,” he added.

Obasanjo, who is a special envoy to Guinea-Bissau on peace-keeping mission, appealed to leaders in the African continent to embrace inclusiveness as a major drive to move it forward, while maintaining that peace and security was the basic ingredient for socio-economic development.

Obasanjo said: “Of necessity, we have to pay attention to base on security. My involvement in Guinea-Bissau was an enduring involvement. I have been in that development when I was in government as president of Nigeria and ECOWAS, appointing me as special envoy that kept my involvement and my interest.

He also raised the alarm over the rate of unemployment in the African nations, urging leaders to pay adequate attention to youth employment.

“A situation, where more than 50 per cent of our youths are unemployed, is extremely dangerous. We now have a situation in part of West Africa, where people now are dying of starvation. Is it that we are not producing enough food or are we not producing what we produce evenly? Whatever it is, it is shameful. It has led us to be begging international community for supply of food to any part of West Africa, it is not right.

“All that I have said is that you have a lot of work to do. These are jobs that will demand all your efforts, it will demand persuading our leaders to do what is right, when it is right all the time.

Earlier, the visitor commended Obasanjo on his peace-keeping effort in Guinea-Bissau and the ECOWAS community as a whole.

Adeboye in Ibadan on Sunday