Arts and Culture
By Akintayo Abodunrin On Mar 29, 2020 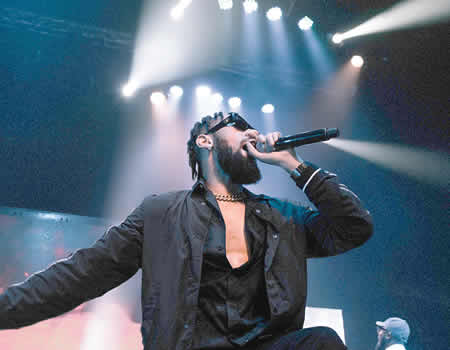 During the show themed ‘Deal with it’, the actor and performer   thoroughly entertained the crowd as he effortlessly dished out numbers from his albums.

Supported by a full band of instrumentalists and backing vocalists, Phyno proved his mettle as a stage performer with popular songs, ‘One time’, ‘Get the Info’, ‘Parcel’, ‘Link up’, ‘Isi Ego’, ‘Alobam’ and ‘Konnect’ among others.

With Kcee, Paul ‘Rudeboy’ Okoye, Yaw and Regional Managing Director of TRACE, Sam Onyemelukwe as his chief cheerleaders, Phyno gave all of himself on the stage. He paused to thank Kcee at a point for giving him one million naira he never collected back to shoot a video at a point when he was flat broke. He spiced up the evening with similar anecdotes about the inspirations behind the numbers he rendered.

The enjoyable evening was further livened up by sponsors including LG, Pepsi, Lord’s Gin and TerraKulture. While the beverage and liquor company ensured that glasses remained filled and throats were not dry to sing along with the artist, LG held a raffle draw. Five lucky guests went home way with units of XBoom Bluetooth boxes at the end of the raffle.

TRACE Live celebrates the beauty of music by highlighting a blend of sweet vocals, live instruments, dancers, and an energetic audience.

Though some of the fans who had expected his collaborator, Olamide to be present and probably jam with him were a bit disappointed, the artist affirmed his rating as a master entertainer. Rude Boy, however, appeared briefly on the stage.