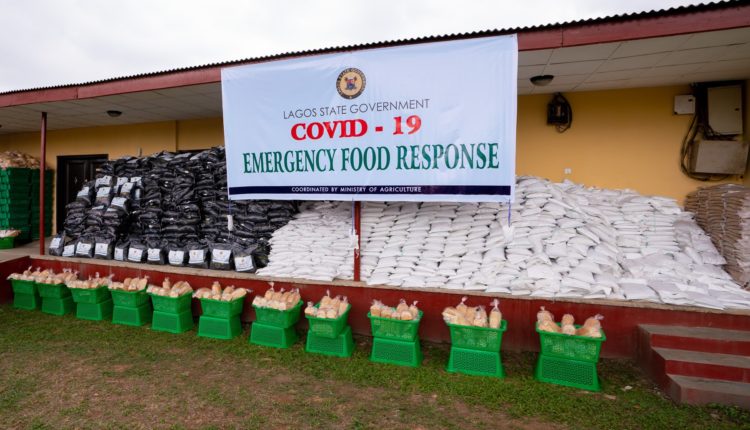 The Lagos State government on Friday announced that it will feed no fewer than 200,000 households following the COVID 19 hardship in the state.

This decision came amidst concerns over the economic and social crises that may dog a lockdown of states by their governments.

Some traders who spoke with Saturday Tribune warned that without government assistance, closure of markets and lockdowns will bankrupt and even, kill many. (See pages 19, 20 and 29 for story.)

Governor Babajide Sanwo-Olu unveiled the economic stimulus package for the indigent and the most vulnerable in the society, a few days after the state government issued a stay-at-home directive to residents, in order to curtail the spread of the novel coronavirus.

The stimulus comes in food packs of rice, bags of beans, garri, bread, dry pepper, among others, to be distributed to every local government in the state and is aimed at cushioning the effect of the 14-day stay-at-home directive. The package would touch at least 200,000 households in the first phase.

Governor Sanwo-Olu made this known while speaking after an on-the-spot assessment of one of the state-owned food banks, located inside the premises of the Ministry of Agriculture and Cooperatives in Agege, saying that the economic stimulus would reduce the burden of the temporary economic downturn on the citizens caused by the outbreak of COVID-19.

According to him, the food packs, which were put together by the Ministry of Agriculture and Cooperatives will reach the most vulnerable communities and households across Lagos, saying that the indigents who rely on daily wages would be given priority.

“We are here for an on-the-spot assessment of our readiness, to see how we can fast-track some of our stimulus packages for our citizens. We are all aware that this is a trying time for our citizens and since the partial drop in economic activities, our government deemed it necessary to reach out to the vulnerable ones in the society.

“These people are those that fall below the pyramid, the aged and the physically challenged who need to move from one part of the city to another for them to have a living. We felt that as a government, the least we can do is to identify them and give them these stimulus packages immediately,” the governor stated.

The governor further said that the package would touch at least 200,000 households in the first phase, saying the food packs were produced for a size of six people per household and would last for at least fourteen days.

“We have packaged dry food stimulus for about two hundred thousand families in the first instance for a household of husband, wife and about four children. We would be giving bags of rice, bags of beans, garri, bread, dry pepper and we are trying to see if we can add water and some elements of vitamin C. Each ration, we believe is going to be able to last them at least minimum 14 days just as our advocacy around stay at home, stay wih your loved ones will be respected.

“This is a catalytic initiative of our administration with the hope that well meaning corporate organisations and private individuals can step up to complement the efforts of the government,” Sanwo-Olu said.

The State Commissioner for Agriculture, Prince Gbolahan Lawal, earlier said the government would be working with the existing database of the state – using the Lagos State Social register and 4,000 community development association register in 377 wards.

He said the economic stimulus was part of Governor Sanwo-Olu’s administration’s initiatives tailored towards ensuring that food security was sustained in Lagos.

The Osun State government on Friday urged citizens and residents of the State that are currently out of the country, to stay put in their countries of residence.

This came as some indigenes of the State who reside in a neighbouring Cote d’Ivoire were denied right of passage through Ogun State on their way back to Osun.

Prince Wole Oyebamiji, the Secretary to the Government of Osun, who made this known in a statement on Friday, said the government was already making logistical arrangements to convey the stranded citizens back to the state with full compliments of the state›s security.

The statement reads in part: “the State Government of Osun has been notified by the Ogun State Government that some indigenes of our State, coming from a neighbouring Francophone country, have been denied the right of passage through Ogun State to their destination.

“As a responsible and responsive government that places premium on the lives and well-being of its citizens, we are already making logistical arrangements to convey our citizens back to the state with the full compliments of the state›s security. We cannot afford to have our citizens marooned or abandoned.

“We urge other citizens of our state that are currently out of the country, to stay put in their countries of residence, as it is generally hazardous for persons to relocate in these trying times.»

The SSG added that as a precautionary measure, the affected people would be tested for the Coronavirus and certified free of it before they would be allowed to rejoin their families.

“The State Government shall convey these members of its citizenry to Ejigbo, where they hail from. They will be screened in this place before rejoining their families, if certified free of the coronavirus,” he said.

Oyebamiji also revealed that the State government may soon shut its land borders and may not be able to retrieve returnees to Osun going forward.

“The Government may be shutting our own borders soon and may therefore not be able to retrieve such returnees from the borders of other states if they are denied passage,” the SSG disclosed.

The Federal Capital Territory Administration (FCTA), on Friday began fumigation of some parts of the territory in order to curtail the spread of coronavirus in the nation›s capital, Abuja.

FCT Minister of State, Dr Ramatu Tijjani Aliyu, who led the team to Gwarinpa market, appealed to the traders to vacate the market for the period of the fumigation exercise.

In a statement by her Special Assistant (Media), Austine Elemue, the minister said if the situation continues like this, the administration will be forced to impose a curfew.”

The statement said the minister, who spoke in the language of the people (pigin and Hausa), told the traders that the coronavirus is not only real but contagious, just as she appealed to residents to abide by the preventive measures outlined by the relevant authorities.

While reacting to sit-at-home order, Dr Aliyu threatened that the FCT administration might be forced to impose curfew on the city if residents failed to comply with social distancing rule in market places and other social or religious gatherings across the territory.

According to her: “If the situation continues like this, we will be forced to impose a curfew. That is why I came out myself to monitor and appeal to their conscience to vacate the market especially those not selling food stuffs and other essential commodities.

“I have called the Commissioner of Police myself to ensure that the enforcement team commences enforcement immediately. We want to fumigate this market, but people refused to quit the market, making fumigation difficult for government. I am personally out to see things myself.

“I appeal to citizens and residents to comply with the preventive measures outlined by government. Please comply and vacate the market to make the job easy for government because inhaling this substances could be injurious to your lungs. We are appealing that the traders should stay at home for this period of fumigation.

“Government is aware of the economic situation and it is not in our best interest to destroy your goods. Please stay at home and as a mother, I feel for you,” she added.

Dr Aliyu assured that the FCT authorities will fumigate the major markets, parks and religious centres in the city centre and other satellite towns in the territory as one of the steps to prevent the spread of coronavirus.

President Muhammadu Buhari has approved the use of four stadia owned by the Federal Government and also the National Youth Service Corps (NYSC) camps as isolation centres for the suspected cases of coronavirus.

This was disclosed by the Minister of Youths and Sports, Mr Sunday Dare, on Friday through his twitter handle.

According to him, “Mr. President has approved for the Ministry of Youth and Sports to open and make available the stadiums in Surulere Lagos, Ibadan, Abuja and Kaduna as well as our NYSC camps nationwide for use as isolation centres as they are needed.

“We are in touch with relevant authorities to make them available. The Ministry of Youth and Sports is ready to open and make available the stadiums to erect tents. We will be touching base with relevant governments and institutions in this regard.

“We are in this together. And together we shall overcome. I call on the youths of Nigeria to be at the vanguard of dissemination of timely and accurate information via social media to Nigerians in their communities. We must ratchet up the awareness campaign for our people.”

Nigeria’s former President, Chief Olusegun Obasanjo, on Friday, handed over a 32-room facility at his former Presidential Hilltop residence in Abeokuta, to the Ogun State government as isolation centre for fight against Coronavirus.

Obasanjo in a statement by his Special Assistant on Media, Kehinde Akinyemi, expressed worry over the spread of the disease, saying the gesture would one way or the other assist the state government in addressing the situation.

The facility, located at Oke-Sari, off the Presidential Boulevard has a standby generator and the rooms all en-suite.

Obasanjo in the statement said “I think those who can in one way or another assist in this situation should do so.”

APC Convention: Our governors are willing to subordinate themselves to responsible…

Buhari in Zamfara to commiserate with terrorism victims