Nigerians’ lives are in your hand ― Gov Umahi to INEC, Security agencies 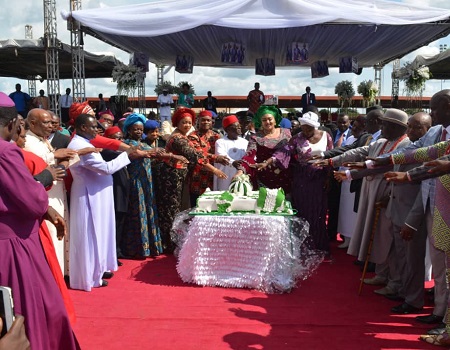 EBONYI State Governor, David Nweze Umahi, has called on the Independent National Electoral Commission (INEC) and security agencies at the National level to be transparent, as the continuous existence of the country lies in their hand vis-a-vis 2019.

Governor Umahi addressing over thirty thousand citizens of the state, charged the INEC to keep its hand straight and avoid compromise that will cause violence in the nation.

Governor Umahi who is seeking support for his re-election under the platform of Peoples Democratic Party (PDP), described the statement made by the APC aspirant from the southern extraction to serve for only one tenure if voted into power as a great deceit and mischievous ploy to destabilise the existing equity standards in power rotation among the zones of the State.

“INEC and security agencies must realise that as we move into the 2019 general elections, they will determine the way Nigeria goes with the country’s continued existence before them.”

“Be wise my people, any opposition person voted into Governorship in the State would surely insist on a second tenure thereby jeopardising the turn of the Northern zone in general and the Abakaliki bloc in particular, come 2019.

“So I call on the Northern zone especially the Izzi bloc to vigorously resist such attempt at shortchanging them, I am the only Governor that would, in all sincerity, hand over to the bloc, come 2023”, he said.

Governor Umahi however, launched, ‘operation catch 100 persons’ each to achieve maximum support for his re-election as he promised to recognise all support groups.

He then stated out his new visions for the State to include establishment of a world-class Teaching hospital for the State,  more internal roads in Ikwo, Afikpo, Onueke, Ohaozara, Effium and other rapidly developing towns in the State.

He further, emphasized that empowerment of citizens, industrialisation of the State and welfare of citizens would receive greater impetus in the coming years.

He also assured that all started and inherited projects in the state would be completed before March, next year. He included that his administration was set to achieve the complete reconstruction of the 199Km Abakaliki ring road and another one linking the entire Southern zone of the State, adding that the State Government had fully completed 20Km out of the road while another 5Km has been earmarked for commencement, while the Abakaliki – Afikpo and Abakaliki -Enugu roads would be dualised.

The Chairman of the event and Vice Chancellor of Ebonyi State University, Professor Chigozie Ogbu in his remark thanked God for the continued existence of Nigeria as a nation in spite of all odds.

He noted that the self-actualisation of people lies in the quality of its leadership, adding that Governor Umahi has demonstrated both ability and sagacity to continue to pilot the state to its desired height.

In their separate goodwill messages, the Chairman, elders council, Ambassador Frank Ogbuewu, the Secretary to the State Government, Hygenus Nwokwu and the Director-General of Divine Mandate Campaign Organisation, Engr. Fidelis Nwankwo on behalf of the North and Central senatorial zones of the State insisted that equity must prevail over the leadership of the State, adding that Umahi ‘s second tenure was not negotiable.