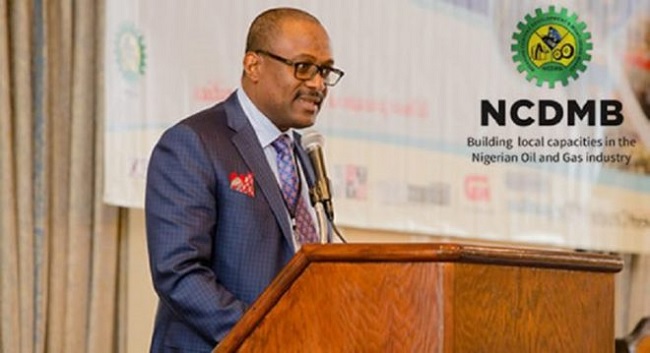 The Executive Secretary of the Nigerian Content Development Monitoring Board (NCDMB), Mr Simbi Wabote, has stated that in spite of the daunting challenges against the development and growth of the Micro, Small and Medium Enterprises MSMEs in Nigeria, that segment of the economy remains the backbone of the nation’s economy.

Speaking at the weekend at Niger Delta MSME Summit held in Port Harcourt, Wobote identified three major challenges of MSMEs as inadequate electricity, lack of access to funds and the informality of the  sector of the economy.

He said that though the MSMEs contributed just about eight per cent to the growth of the economy it has a strong potential and could contribute up to 48 per cent of Gross Domestic Product GDP, and tasked young Nigerians to embrace constructive engagement and strategic planning to make themselves relevant in the current global economy.

Speaking on the theme “Stimulating MSME’s Growth Beyond Oil”, the Executive Secretary, NCDMB urged young Nigerians to prepare themselves to be competitive in the emerging world economic order beyond the oil, just as he acknowledged that the MSMEs remained very strong on the service sector and needed to do more on the manufacturing sector.

Wabote stated that the theme of the summit was very apt and timely in view of the fact that energy transition had become an immediate reality and stakeholders must ensure that the Niger Delta region was not left behind in the shift away from fossil fuel to renewable energy.

He added that the whole world was fast moving away from crude oil and urged Nigeria to embrace change in energy and other discovered resources to grow the economy, and commended President Muhammadu Buhari’s administration for coming up with policies and programmes to diversify the economy and prepare Nigeria for the energy transition.

“Some of the policies like the closing of land borders from smuggling of goods and encouraging patronage of local products to grow entrepreneurs among others. Government support in reforming our servicing away from oil has helped the Ministry of Micro, Small and Medium Enterprises (MSME’S) to contribute a very significant role in the various sub-sectors of the economy that constituted the non-oil sector,” he said.

According to him, “MSME’S own 96 per cent of businesses and generate 84 per cent of employment in Nigeria and remain the backbone of the country’s economy despite the challenging times it’s facing.”

Earlier in his address, Convener of the Summit, Moses Siasia, said the choice of the theme of the summit was to “try to look at a future beyond oil. To challenge the narrative and reality of the absence of institutional support for the young population of Nigeria.”

He, therefore, called for the immediate establishment of the Niger Delta Entrepreneurship Development Fund; the implementation of the Niger Delta Development Funding. and streamlining of efforts by Ministries, Department and Agencies to support young entrepreneurs, pointing out to leaders of the region that the true wealth of the region was not in oil but in the people.

Similarly, Mrs Natasha Akpoti, one of the Keynote speakers, who spoke on “The Healthy Diversification of the Niger Delta Economy away from its Reliance on Oil,” said that the Niger Delta region with over 30 million people has an unsustainable percentage of poverty which need to be curbed.

Akpoti who is also the Chief Executive Officer of Legend Art Group said that Niger Delta as the region that supplies revenue to the entire nation was in a deplorable condition and should be robustly supported especially the MSME’s to scale up in respective enterprises.

“It’s quite fortunate that the Federal Government has put in a lot of mechanisms to mitigate the challenges such as access to finance, access to markets and also providing safety valves for SME’s to be monitored,” she said.

She called on stakeholders involved in sharing a healthy framework in supporting MSMEs to come together and provide solutions to all the financing, electricity, market strategies that the MSMEs need.