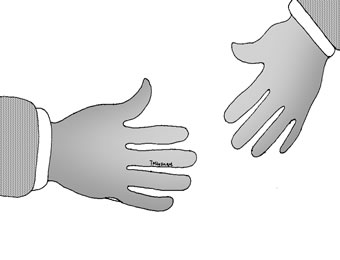 MOST religions and the proper use of common sense tell every thinking human being that the greatest law and the greatest civilization comes from the statement “love your neighbour as yourself”! Only genuine, unselfish, love does no harm to other people. If we all apply this law in our personal lives and our relationships with all else, there will be no hatreds, wars, terrorisms, and the real or only imagined undermining and marginalization of other people. There would then be in such places, what has been referred to in many circles as “the kingdom of God!”

Unfortunately, in spite of all the claims by men – including all the “holy men and women of ‘God’” – the heart of human beings is desperately wicked! People claim that they love other people, speak the truth, etc; but to virtually everybody else except themselves, it is often very clear that they do none of such things. Thus the world of hatred, cheating, injustice and the undermining of others go on non-stop. Those whose civilisation is in-optimal and those whose other people’s injustices against them are so challenging that they hardly have time to think through it properly, resort to counter wickedness and hatred – usually as wars, terrorism or other counter-injustices – as the immediate ways to redress those injustices.

However, in the modern and truly civilized world, when persisting injustices, underminings or marginalisations exist within countries, the civilised ways to deal with them are not by any methods of counter-hatreds, wars or terrorisms. The modern day, very civilized ways to do these is through well-advertised and educated plebiscites on how to deal with such injustices and marginalisations. Only the very wicked people who prefer such persisting evils, wars and terrorisms, resist such plebiscites. Injustices and marginalizations are global phenomenon. They are not attributes of so-called civilised or non-civilised (developed or developing) countries; instead, they are the measures of the desperate wickedness of the human nature everywhere that they may be found! It exists even now in the white and black American populations, the native Indian and the rest of the Americans; in the UK of “the English and the rest (especially the Scottish)”; in the Catalonia versus the rest of the Spanish populations, even in the European Union, etc!

The application of these modern world’s ways of addressing these marginalisations and national injustices has recently seen the Scottish plebiscite or referendum in the UK, the Brexit one of the European Union, and the pending and ever brewing one of the Catalonia referendum in Spain; among the many such others globally. In Nigeria, the matter of gross national injustices, whether true or false(but all, surely, can each be easily examined and reasonable concluded upon) are the reasons for the Niger Delta agitations, the MASSOP and IPOB ones, the OPC one, even the Boko Haram ones to some extent, etc. On my personal level, I will advise ANYBODY who would prefer to say or persuade him or herself to believe otherwise, that s/he may be suffering from the desperate wickedness and lie telling or false denials inherent in the human heart. Such a person should however remember that there will be a hereafter! Love and truth are some of the most essential ingredients for that part of our total existence; and working in them must start here.

In the face of all these real or only imagined injustices and marginalizations in Nigeria, true civilisation indicates that we would do well to address all of them in the only ways that they should be done, lovingly, mutually respectfully. Those who claim to be marginalised or to have national injustices against them should be requested to articulate and submit them so that they can be examined properly and redressed, if found to be true. If they continue to feel that the injustices or marginalisations are better addressed in other more durable ad civilised ways, they should suggest those ways in the either or one or two other ways and have those subjected to the necessary plebiscites or referenda. Those who oppose these civilized plebiscite or referenda ways of doing things ANYWHERE are the war mongers; and they must know it. It is their duty to allow the civilized thing to take place. In this country, people have called it “restructuring”. At the very “worst” for such obviously rather selfish people, such restructuring will produce a true fiscal federation, confederation or a league of independent but mutually loving and respectful people. Gadhafi had advised Nigeria long ago, before the imperialists killed him and left his Libya worse than they met them, similarly – that continuing to live as loving friendly neighbours is better than a never-ending and continuously growing self-deceptions and animosities. But shall our self-advantage-seeking so-called leaders heed this?

Such people had better go and read the “prophesies” of Gadhafi to the Libyan people before his enemy-based elimination. The obvious problem of Gadhafi and Libya of the time needed to be sorted out; but it could have been sorted out by other more civilised methods than the truly wicked one that the imperialists used! A word, they say, should be enough for the wise. The kingdom of God is for everyone; except for those who willingly refuse to go there or to follow its ways. God bless Nigeria! God bless our 2 now gone years of “change” government and where He is leading us by it!

5 things President Buahri can do to ensure peace, stability in South East

The conflict in the Arab world