Mission schools should be returned to save education sector —IADC Principal 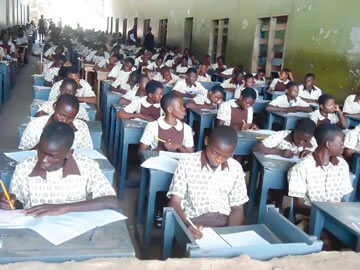 Governments have been urged to consider the important role the church is playing in providing qualitative education to the masses in the country and return missions schools to their owners.

Principal of Ijebu Anglican Diocesan College (IADC), Igan-Ipabi, Venerable S.B, Omosanya, who gave this advice, stated that Anglican Communion ventured into the education system in the country to salvage the falling standard of education and infrastructure, and lack of moral training in the young ones.

Venerable Omosanya made this remark last Wednesday at the school’s health talk programme tagged ‘Dentistry Check-up,’  which was part of the activities marking the 20th anniversary of the school.

The one week-long event, which held from Tuesday, October 4 till Friday, October 7, 2016 featured general cleaning of the community, dentistry check-up, novelty match\cultural day and thanksgiving-respectively.

Given the general situation in the country, he said that 20th anniversary didn’t call for much celebration, but that, “20 years in the life of any organisation is not a “child’s play,” adding that some started sometimes like IADC and today, they have gone under.”

He noted: “That we are still existing and not only existing, but going stronger year by year, we are very grateful to Him and that is why we want to go to church on Friday to offer our thanksgiving to God for his faithfulness and goodness in our lives over the years, over our proprietors, past and present; over our students past and present; their parents, and of course over all that we have been able to do with the help of God.

“For the past 20 years we have been able to sustain the vision of the founder Bishop A. S. O. Olowoyo, and by the grace of God, we have touched and moulded many lives, some of whom gained admission to great universities, home and abroad and others who are occupying key positions in the society.”

“If that can be allowed in other aspects of our lives it cannot be allowed in education because education is the foundation of the future of any society. Any country that wants to make it must have a strong educational system. So, some of this are the shortcomings that the church feels it should correct.”

“As you can see from the Ijebu Diocesan Communion, the vision of the founding father is to have a school where the students will have a proper moral religious training, coupled with qualitative education, which the students would need in different aspects of life. Our charges are highly affordable. In fact, for many years, the church subsidised the school fees so that parents could afford it,” Venerable Omosanya stated further.

Dr Akinboro Ebunoluwa, a graduate of Dentistry from the University of Ibadan, who is a product of the school and the facilitator of the ‘Dentistry Check-up,’ while speaking on the programme, said the passion to impact on her alma mater, after 10 years of leaving the school, was the rationale behind the health programme.

She said: “It has always been on my mind for quite a while to carry out a general examination for students and staff of the school, just to give back to my school and as my contribution to the 20th anniversary. We had a health talk earlier in the day in the hall, where we educated the students on their health.”

Ebunoluwa, who came in the company of another old student of the school, Dr Awokoya Motolani and other 11 dentists, described the mission as God-given, and that it was just a tip of the iceberg, compared with the virtues the school impacted on her.

She said: “I learnt a lot while I was here, because I changed over from a public school. I learnt leadership from here; how to lead a set of people without being afraid and timid and then living in the hostel taught me tolerance because you are exposed to living with people from different backgrounds and behaviours. Then, in the school, we had teachers who were like our fathers and mothers and they inculcated discipline in us.”

She encouraged other old students to also find a way of giving back to the school, saying, “remember where you are coming from, remember the people who had influenced your lives and not just your parents.”