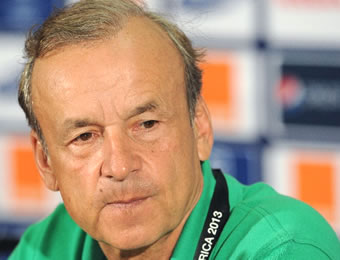 The  Shambolic 4-4 result recorded by the Super Eagles  against Sierra Leone in a Nations Cup qualifier at  the Samuel Ogbemudia Stadium has once again  brought to the fore the incompetence and technical  inefficiency of Coach Gernot Rohr.

What transpired in the game where the Eagles squandered  a 4-0 lead to draw 4-4 has given credence to Minister of Youth and Sports Development Mr Sunday Dare’s position   that Rohr lacks the  technical competence  to manage a big team like the Super Eagles.

The Super Eagles had gone  four goals up in the first thirty minutes of the game, conceded one before half-time, only  to concede another three  goals in the second half with a  coach who  earns huge income  from  tax payers deductions remaining  rudderless  on the touchline.

This result has raised fundamental  questions  on  the continued retention  of a coach who does not appear  to be better than Nigerian  indigenous  coaches. Is there really a  difference between Gernot Rohr and our indigenous coaches who would earn less and in local currency? How can we justify the retention of a coach with strong  aversion for local players  and our league? How long are we going  to waste tax payers money on an  incompetent, trial and error journey  man?

Following the tension and media frenzy that surrounded Rohr’s contract renewal, it would be  recalled that  the Minister  had insisted  that Rohr must up his game if he wanted  to retain his job.  Sadly, the Minister’s assertion  was misconstrued by  people without foresight  who accused  him of planning  to hire another coach to replace Rohr.

There was also a media backlash  from certain quarters seeking  to  justify why Rohr’s contract needed  to be renewed.  According to the Punch edition  of  May 19th 2020, “But a top football stakeholder, who spoke on condition of anonymity, told our correspondent that even though Rohr was about sealing a new deal with the NFF, the ministry was looking at Redknapp taking over as coach of the Eagles in the coming days.

“He (Rohr) is expected to get another contract offer from the NFF as there are other likely conditions included in the deal to be sent to him today (Monday),” our source said.

“But if he (Rohr) doesn’t accept the new offer, it will pave the way for the ministry’s preferred candidate Redknapp who  he is highly rated by the ministry officials, even though some feel he may be too old for the Eagles job and hasn’t had a coaching job for about three years.”

In his response to alleged  plan to hire a replacement  for Rohr, the  Minister was  quoted by  Goal.com  “All I want is a coach that is competent, I don’t care whether it is Rohr or not. The name doesn’t matter, but does he have the credentials?”

“So if you want to coach a Nigerian team, you better be sound because the invited players that are going to represent the country train under the best coaches, therefore, we don’t want a player that is more sound than the coach.”

With what is playing out, the Minister’s position on the German is justified.

Despite all the agitations that trailed his re appointment, Rohr has not changed his attitude  to the Nigerian league players, he still picks  average foreign – based players who can barely compete  against the  home-based players.

Although  the Nigerian  league has not resumed due to the effect of Covid-19, it is doubtful  if he would have given opportunity  to  players from the domestic  league at the expense of his lethargic , tentatively average foreigners.

While the match against Sierra Leone in Freetown  can still be won to   redeem  Eagles battered image, the continued  retention  of Rohr is a keg of  gun powder which could explode  in our faces with dire consequences  for our football.

Further damage to our national pride and football culture  can be averted if the NFF commences  the process  of seeking an alternative to the German.

A stitch in time saves nine.

Covid-19 in Nigeria: A postmortem