Membership Registration/Revalidation: Will APC solve its problems this time? 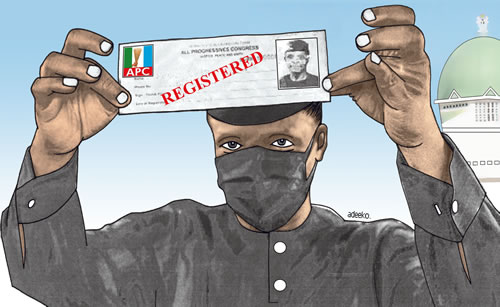 After the turmoil which quaked its foundations, the ruling All Progressives Congress (APC) has begun a nationwide membership registration/revalidation exercise as part of efforts to reset its structure. DARE ADEKANMBI looks at the formation of the party and its continuing search for a progressive identity.

History was made in Nigeria’s political firmament in 2013 when, late in that year, a group of politicians of the opposition hew, brushed aside ideological incompatibility to form a party known and addressed as the All Progressives Congress (APC). It was the first time that such a feat would be achieved in the current Fourth Republic.

APC was formed by the coming together of three main opposition parties now defunct. The Action Congress of Nigeria (ACN), which held sway in the South-West zone and Edo, the Congress for Progressive Change (CPC), whose presence was felt more in the North than in the South and the All Nigeria Peoples Party (ANPP), which also largely plied its political trade in the North. These main parties were joined by a faction of the All Progressive Grand Alliance (APGA).

Upon its formation and take-off, chieftains of the APC noised it all over the world that they would wrench power from the Peoples Democratic Party (PDP) which had bestridden the country’s political landscape for 16 years. And their political gospel did resonate with some disgruntled PDP governors and leaders who dumped the umbrella for the broom.

The party not only upstaged the PDP-led central government of Dr Goodluck Jonathan, it also conquered more states than the behemoth PDP. Thus came the change of guard at the presidential seat of power after the 2015 elections which ushered in the presidency of Muhammadu Buhari.

Not long after it mounted the saddle, the party began to manifest signs of stress. In the distribution of ministerial portfolios, the CPC wing was accused of getting more than others, despite already taking the biggest chunk in the soup pot, the presidency. Apart from the ACN which had full-time ministers manning key government ministries, other partners in the union felt subsumed.

The battleground soon shifted from government to the party where stakeholders schemed treacherously to outdo one another in the power game for the control of the soul of the party. The strife to establish dominance has since seen the APC live with a record of four national chairmen in about six years when it got to power.

Protem national chairman and former Osun State governor, Chief Bisi Akande, handed the party to Chief John Odigie-Oyegun who in turn handed it over to his kinsman from Edo State and former governor of the state, Adams Oshiomhole. The former Labour leader got the sack after an emergency National Executive Committee (NEC) of the party presided over by Buhari. Thence came the national caretaker chairmanship of the current helmsman and Yobe State governor, Alhaji Mai Mala Buni, whose committee has been mandated to conduct a fresh registration of members and validate the membership of those who have not left the party.

One thing observers have reached a consensus on as far as the APC is concerned is the inability of the legacy parties, as APC constituent parties are called, to dissolve into one ideological whole, eight years after the ruling party was formed.

The theory of salad bowl, a sociological construct for the integration of multicultural entities, has come to metaphorise the development in APC since formation. In a salad bowl, the components of the appetizer are visible such that carrot, lettuce, cabbage and even the cream put on it can be seen.

Similarly, the CPC and the ACN wings in the main appear stuck to the political culture they have ingested prior to their teaming up in APC. This is not only visible to observers of the party, even APC chieftains admit to the need for ideological convergence as crucial in moving the party forward.

Unlike the salad bowl metaphor, APC, which has been in the saddled for about six unbroken years, ought to have transformed into a melting pot of sort.  In a melting pot, the component parts dissolve or melt together into the whole.

As another round of elections beckons, the ruling party has deemed it fit to reset its house with the ongoing registration of members and validation of the membership of those who have remained with the party since inception. But will the party utilise the opportunity to straighten all crooked lines that have made it a standing structure on the outside, but distressed within?

Chief Akande, who led the party at inception, faults the registration exercise, premising his argument on the wastefulness of such exercise when a similar one was done in 2014.

“No population census is repeated within less than a decade and voters are not re-registered at every election.

“Within this context, I see the present APC membership registration within less than a decade after the original register as an indefensible aberration leading to certain ugly perceptions.

“The first major perception is that APC, already having a well computerised register for an average 100 leaders of similar ideological orientation per each of the 120,000 polling units across Nigeria, might be lacking comprehension and matrix of modern-day technology.

“The second major perception is that APC leadership might be wasteful and in-appreciative of the proper use of money in a kind of scanty economy in which Nigeria now finds itself.

“These seeming ugly perceptions put into abeyance the applause of the national election successes that the original APC register enjoyed since its completion on 15th February, 2014 and the over N1billion one billion of 2014’s value that the original register cost when APC had no money of its own,” he said.

One of Akande’s successors, Oshiomhole agrees with elder statesman and queries the constitutionality of the exercise, particularly the part where old members are being asked to revalidate their membership of the party.

“APC is governed by a constitution and not by man. The constitution only provides for registration and I registered as a member of the APC in 2014 under the interim national chairman, Chief Bisi Akande.

“There is nothing in the APC constitution that says a member shall revalidate or renew its membership. So, revalidation is strange to our constitution.

“I have only done this because I want peace to reign but in doing this, we have to be careful not to create a constitutional breach,” he said.

Akande and Oshiomhole’s jeremiad was countered by the duo of the vice-president, Professor Yemi Osinbajo and the chairman of the Nigeria Governors Forum (NGF) and Ekiti State governor, Dr Kayode Fayemi.

Speaking after revalidating his membership at his place of origin in Ikenne Remo, Ogun State, Osinbajo praised the exercise as important and one that is necessary.

“Party registration and revalidation is important because it offers us an opportunity to have a credible roll of members such that we can reach our members from the polling booth level all the way to the wards, local government and federal constituencies.

“The people are the party and the party is the people. Ours is a grassroots party. Our focus is on the welfare, prosperity and wellbeing of all our people,” he said.

Fayemi, also speaking after submitting to the exercise in Isan Ekiti where he hails from, said the views expressed by Akande and Oshiomhole did not detract from the constitutionality of the exercise.

“The APC Constitution in Article 9 stipulates that our register must be updated every six months. So, Baba Akande never said we should not register or revalidate our membership. He only tasked the leadership on the way it should be done to earn credibility.

“We don’t want to deregister anybody. Let members revalidate their membership and those who are non-members but interested should also feel free to join us. That is what the exercise is all about,” Fayemi said.

The divergent views expressed by the various leaders of the party suggest the possibility of suits being filed in various courts after the conclusion of the exercise, particularly by those in the losing camps or blocs.  This is because the 2023 power play is at the centre of the current registration of members. APC national leader, Buhari, said last week that the days of imposition of candidates on the party are over and that members, instead of a group of leaders, would henceforth choose their representatives at elections.

The outcome of the exercise will say a lot about APC future and the 2023 elections. On the one hand, the registration provides an opportunity to bond into a whole and resolve issues of ideological impurity within its fold. On the otherhand, the party is presented with a golden chance to set a template of how political parties should be run, particularly reverting to the days of yore when people paid membership dues and owned the parties.

This is unlike the current arrangement across parties where moneybags hijack the parties and hold them by the jugular, selling tickets to the highest bidders or those who can lick the greater amount of their spittle.

There are positive signs of past wounds getting healed in a state like Ogun where the governor, Dapo Abiodun and his immediate predecessor, Ibikunle Amosun seem to be on the same page, calling for the registration of all members, both returning and new without discrimination.

The same cannot be said of the party in Kwara State where factions loyal to the governor and the one nurtured by Information, Culture and Tourism Minister, Lai Mohammed, turned the stakeholders’ meeting called recently into a chair-throwing ‘sport.’

All eyes are on Imo, River, Lagos and other states where already factions are laying claims to having ‘the upper hand’ in the ongoing exercise.

The lost president and a nation in grief: Remembering Chief Obafemi Awolowo