Arts and Culture
By Akintayo Abodunrin On Jun 2, 2019 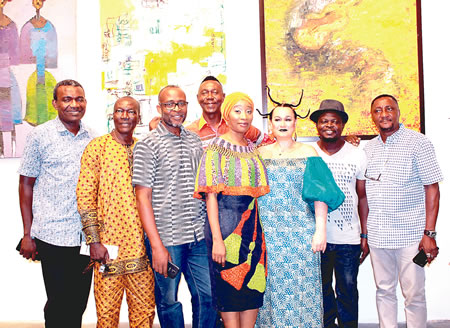 LESS than a month after ‘Moremi the Musical’ completed its second successful outing on stage, the House of Oduduwa has decided to continue celebrating and propagating the legacies of the Ife queen, wife, mother and warrior.

Having told her inspirational story of sacrifice and courage in a book (Queen Moremi Ajasoro) and on the stage, the foundation established by the Ooni of Ife, Oba Adeyeye Enitan Ogunwusi and popular art gallery, Alexis Galleries, have decided to include visual artists in the celebration of the heroine.

From June 9 to 14, a group exhibition titled ‘A View from the Masters’, and featuring 28 major Nigerian artists, will be on at Alexis Galleries, Victoria Island, Lagos. After that, it will move to London, New York, Dubai and Lebanon.

She said: “The show is to keep the legacies of Moremi embedded in our memories. It is a story of leadership and how she took a bold step to save her people.”

Also speaking, the founder and director, Alexis Galleries, Patty Chidiac-Mastrogiannis explained that the artists, comprising  27 men and a woman, would each present a work of art in a different medium to depict Moremi as they see her.

On why only one female was featuring in the show, Chidiac-Mastrogiannis said she wanted more women but that, “in the visual art scene, there is a shortage of full-time studio artists with long years of experience. But, the focus for the gallery is to place Moremi delicately in the hands of masters. We are making history with artists whose names are already part of history.”

Reacting to the same question, Sam Ovraiti noted that there was only one kind of Moremi in history and that “we need the impact. It is not about the number.”

In his submission, Gerry Nnubia described Moremi as a custodian of culture, “a lovely woman who explored her beauty to save her people.”

Works that will feature in the show include metal sculptures, paintings and mixed media. Part of the show’s proceeds, according to the organisers,  will be donated to a non-governmental organisation in Ile-Ife to be chosen by the Ooni. The  Fine Art Department, Obafemi Awolowo University (OAU) Ile-Ife, will also get part of the proceeds from the show being sponsored by Pepsi, Amstel Malt, Mikano,  Delta Airline, The Homestores and Art Café amongst others.

Africa had slept far too long

Do Nigerian leaders read and what’s their development mindset?