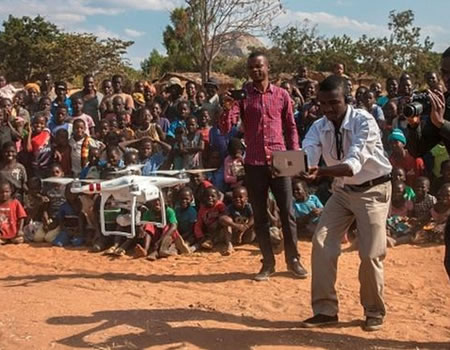 KASUNGU Aerodrome, in central Malawi, will be exclusively used for the project until 2018.

Universities and other partners will also have access to the site.

The project, in partnership with US company Zipline, has cut delivery of medical supplies to minutes instead of hours.

Unicef says it is working globally with a number of governments and private sector partners to explore how drones can be used in humanitarian and development missions.

Unicef says its projects adhere to a strict set of innovation principles and it is committed to sharing its knowledge with the fledging drone community.

It says that the project was launched after a successful test flight last year to deliver dried blood for early infant diagnosis of HIV in hospitals in Malawi.

The organisation also used camera-equipped drones to assess the needs of people cut off during a flood.

“With UAVs we can easily fly over the affected area and see clearly what the impact has been on the ground. This is cheaper and better resolution than satellite images.”

About the air corridor:

Malawi’s Department of Civil Aviation has given permission and specifications for operating delivery drones in the air corridor. They include:

For drone enthusiasts and campaigners, this development is another important step in the right direction.

After years of opposing the commercial and civilian use of drones, African governments are slowly allowing the integration of UAVs in the airspace.

The Malawi air corridor project is a close copy of an idea proposed to the Kenyan government by a Swiss polytechnic about four years ago to operate a drone delivery service called Flying Donkey.

The plan was to operate fixed-wing drones, carrying a payload of up to 20 kg (44lbs), in sparsely populated and infrastructure poor northern Kenya to supplement the postal services.

The project did not take off because the authorities saw it as a threat to security.

While there are legitimate concerns about privacy and safety, the absence of progressive drone laws to regulate the industry means African countries have been missing out on the multi-billion dollar industry.