LG poll: Stop Ajomale from imposing his candidate on us in Ejigbo ―Group tells Tinubu 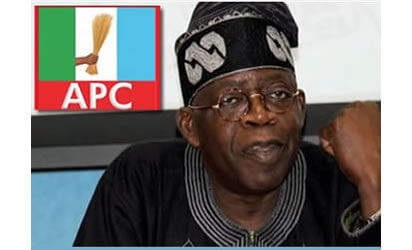 A group within the All Progressives Congress, Asiwaju Progressive Minds (APM), has called on National Leader of APC, Asiwaju Bola Ahmed Tinubu, to call to order the party chairman in Lagos State, Otunba Henry Ajomale, not to impose one Dr Olatunde Olusunmade, his anointed aspirant as APC chairmanship candidate for Ejigbo LCDA in respect of the coming council poll holding in the state.

The group made the call in a letter titled, “No to Ajomale’s imposition of Candidate”, addressed to the state governor, Mr Akinwunmi Ambode, and signed by Arinola Gbadebo, even as it commended the APC national leader for the decision to allow the 18 first term local government chairmen to run automatic ticket in the coming local government election in the state.

The group also urged Governor Ambode to warn his Special Adviser on Communications and Community Development, Hon Kehinde Bamigbetan, not to put Ejigbo LCDA into flame, saying it learnt that the special adviser had positioned people to protest against any consensus candidate of the party that was not from his group, Mandate 2, declaring that Ejigbo was a non-violent LCDA and should continue to remain so.

“We want him (Tinubu) to caution the state chairman, Chief Henry Ajomale, not to impose his anointed aspirant in person of Dr Olatunde Olusunmade on us in our Ejigbo LCDA as he selfishly and erroneously did in the last general elections,” APM said.

“We call on our father and national leader not to allow the Lagos APC Chairman, Chief Henry Ajomale, to install his stooge and anointed aspirant, Dr Olatunde Olusunmade, who belongs to his unpopular and thoughtlessly created political group (The Crusader) as such adoption would further polarize the party in the local government and the constituency as a whole,” the group added.

APM recalled that in 2015 general elections, it was the same Ajomale that forced his son, Ladi, and one Hakeem Muniru on them as candidates for House of Assembly and House of Representatives respectively, leading to loss of the two sensitive positions to the PDP as the aggrieved APC members who belonged to other caucuses worked against the two candidates who were from Ajomale’s political camp (The Crusader).

“We don’t want such to repeat itself again as he is planning to impose another person as Chairmanship candidate from same caucus (The Crusader) that produced the last two candidates. This is not acceptable.

“We are using this medium to call on the party to use any of the neutral aspirants who do not belong to any caucus in the local council so that such aspirant would be a unifying factor after the election.

But reacting, the Chairman, Lagos State chapter of APC, Otunba Ajomale, who spoke on telephone, said the allegation could not be right as the party would be doing its primary next Friday at the Teslim Balogun Stadium, Surulere, saying the exercise would take place in the open and would be difficult for anybody to impose a candidate on the party.

“The conditions for the primary are stated there in the publications. Nobody should predict the outcome. I am not even the chairman of the Electoral Committee”, the party boss said, pointing out that imposition of candidates was not even part of the rules of the primary in APC.

“They are mischief-makers who just want to create problem in the party,” Ajomale declared.

2023: Tinubu deserves to be Nigeria’s next president ― Emir of Ilorin