Lawyers protest over deplorable state of roads in Ogun 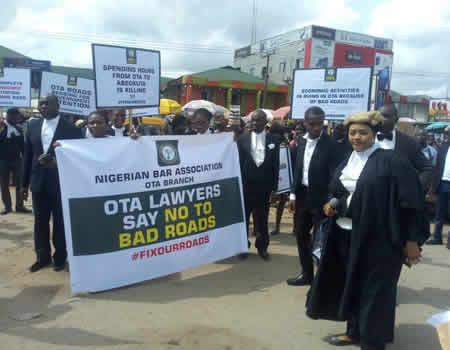 Members of the Nigerian Bar Association (NBA), Ota Branch of Ogun State, on Thursday, staged a peaceful protest over bad state of roads, especially federal governments roads within the state.

The lawyers were armed with placards with inscriptions such as ‘Spending hours from Ota to Abeokuta is killing’, ‘Bad roads have turned many children to orphans,’ ‘Ota Roads: Hell on earth,’ ‘FG, stop killing people instalmentally via bad roads,’ ‘Gov. Dapo Abiodun: Right the wrongs of past governors meted against Ota and its environs’.

Speaking with newsmen the branch chairman, Isaac Ogbah, said residents of the state on a daily basis continued to experience hardship as a result of the bad roads.

The legal practitioners dropped a copy of their press statement with the Head of Local Government Administration of Ado Odo/Ota , Mr Olasubomi Ayorinde, for transmission to the state governor.

They called on the federal and the state governments to start reconstruction work on the Lagos-Abeokuta Expressway, Sango-Idiroko Road, Atan-Lusada Road, Ijoko and Lafenwa-Itele Road among others.

“There is no good road in Ogun State. All the roads have failed. The lawyers and judges don’t get to courts on time due to the condition of these roads. The residents too are suffering.

“Researches have shown that the road network in Nigeria is about 194,000kms, many of these roads are bad, owing to the carelessness of the concerned authorities.

“In many instances, though budget allocations are made, nothing reasonable happens at the end of the day.

“Among the major bad roads that are of utmost concern are the Sango-Ota-Owode-Idiroko Expressway, Atan-Agbara -Lusada Expressway, Lagos-Abeokuta Expressway among others.

” We are giving the state and the Federal Governments 14 days to make a specific statement on these roads. After 14 days if we don’t hear from them, we shall move to the next phase,” he said.

We are in war situation in Nigeria ― Reps, Nigerian Army