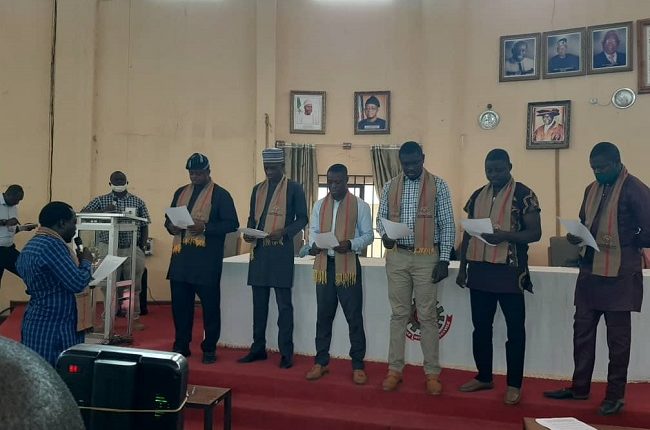 The Ladoke Akintola University of Technology Alumni Association, on Monday, inaugurated the newly elected global executives to pioneer its affairs for the next three years.

The inauguration, which was conducted by Chairman LAUTECH Alumni Electoral Committee 2020, Professor Remi Aworemi in the Governing Council Chamber of LAUTECH Senate Building Ogbomoso, had in attendance the University Management led by the Vice-Chancellor, Professor Michael Ologunde.

In his address, the Vice-Chancellor of the institution, Professor Ologunde congratulated Com. Onilede Solomon-led Global Executives and lauded their determination to add value to their Alma Mater.

He also reiterated the University Management’s support for the alumni and pledged to work in collaboration with the Global Executives to develop the institution.

Ologunde charged Onilede to remain committed to transparency, accountability and accessibility he is known for.
BOT Chairman, Chief Jide Bewaji in his goodwill message encouraged the newly inaugurated executives to be good ambassadors of the university as they discharge their duties.

The Global President, Onilede Solomon while giving his acceptance speech, said that nothing could be more important to his administration than to consolidate on his first-term achievements.

“With the calibre of Alumni that have been elected to serve, I solemnly promise that we shall not fail in serving with excellence and integrity,” he said.

Onilede assured that his administration shall achieve more for both the Association and LAUTECH.
Other personalities that witnessed the inauguration include the Association’s Chairman Board of Trustees and