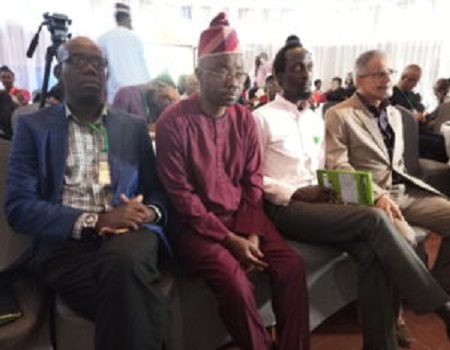 Mr Michael Bankole, Assistant Director, Head/Climate Change and Environment Planning, in the state Ministry of Environment and Water Resources, made the plea during the Climate Action Leaders’ Summit.

The event was organised by the Nigerian Conversation Foundation (NCF) in Lagos.

News Agency of Nigeria (NAN) reports that the theme of the event is “Promoting Nature-Based Investment for Climate Resilience in Lagos.’’

According to Bankole, the idea of reducing emission emanated from a communique after an environmental summit held during Gov. Babatunde Fashola’s regime.

He said the action was abandoned during the last administration, adding that Gov. Babajide Sanwo-Olu was so passionate about the welfare of his citizens that was why the action was being taken place now.

“Lagos State Government is working toward action to reduce our emission from what it is presently.

“Government is also making plans in using renewable energy in the environment, following its mandate of Taking Lagosians to next level.

According to him, the next level, to the state government means a Lagos that is devoid of health challenges, improper waste management and climate change.

“Government is also working toward befitting landfill management facilities but people can only help the state by keeping best waste management.

“The state also embarked on an inventory on emission, using 2015 as our baseline called Green House Gas (GHG) Emission inventory.

“It was discovered that Lagos State produces emission of 55 per cent on energy, 25 per cent on waste and 20 per cent on transportation,’’ Bankole said.

He, however, urged residents to embrace proper waste habit to enable everyone to live in a healthy environment.

Also speaking, Mr Desmond Majekodumi, the Chairman of the occasion and a council member, Nigerian Conversation Foundation (NCF), pleaded with Nigerians to help the incoming generation to overcome climate change.

He said this could do through continuous sensitisation of the people on the effect of climate change.

“Campaign against climate change should be everybody’s business. Whether we like it or not, nature will find its way if proper things are not being done to control it,’’ Majekodumi said.

He said that he had been into farming in Nigeria for more than 35 years and urged Nigerians to take to farming to food production.

He said when more people indulge in agriculture, it would assist the Federal Government to eradicate unemployment and improve the habitable environment for the citizens.

Majekodumi, who said that he had stayed in Kenya for a very long period said that 60 per cent of the Kenyan economy was based on agriculture and 35 on eco-tourists.

He advised NCF to enlighten the people on how to tackle climate change to secure a better, habitable future for the incoming generations.

The Managing Director, Total, Mr Mike Sangster, said that the impact of climate change to had manifested in flooding,  desertification, drought, deforestation. among others

He was represented by Mr Fred the Manager, External Communications of Total at the occasion.

Sangster said that climate challenges required the commitment of government and the citizens to effectively combat them.

He said that if the challenges were not tackled, they would reduce the quality of life in Nigeria and also expose people to great danger.

Sangster said that Total had zero gas flaring in all its new projects, adding that the company engaged in the planting of trees during the celebration of World Environmental Day and other activities to tackle climate change challenges.

Mr Ayodele Alani, Head of Business Development and Communications of NCF, said that his organisation was hoping to come out with a solution to tackle climate change.