Kwara State government has reiterated its commitment to creating an enabling and more sustainable environment for agri-food systems.

Speaking at the commemoration of World Food day 2021, themed “Our actions, our future – better production, better nutrition, a better environment and a better life” in Ilorin, the state Commissioner of Agriculture and Rural Development, Hon. Saba Yisa Gideon, said that the present administration in the state had ensured that food gets to table of its citizens through policies and projects so far taken by the state government.

The commissioner said that such efforts include development of Kwara State Agricultural Transformational Plan, on-going conduct of Digitization of Agricultural Value Chains, Purchase of 15 tractors and their accessories for hiring by farmersat subsidized sum/rate, procurement of two bulldozers for agricultural land clearing activities, procurement, and sale of farm inputs like fertilizer, seeds, and herbicides at subsidized sum/rates, and FADAMA NG-CARES intervention grants for small holder farmers, among others.

He noted that the world food day commemoration was an avenue for government and organisation around the world to organise event and advocate campaign to raise awareness about hunger and malnutrition. 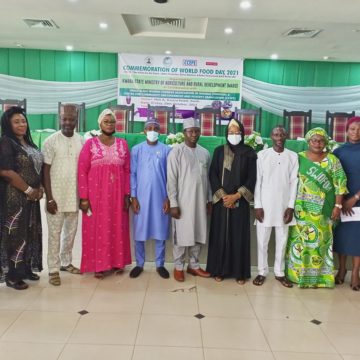 Also speaking, Chief Executive Officer, Centre for Community Empowerment and Poverty Eradication (CCEPE), Mr. Abdurrahman Ayuba, said that the event was aimed to commemorate the United Nations Food and
Agriculture Organisation in 1945 after the wars.

“This day is celebrated widely by many organisations concerned with hunger, poverty and food security and that is why it is no surprise that Centre for Community Empowerment and Poverty Eradication (CCEPE) with financial assistance from ActionAid (International) Nigeria is providing support to Smallholder Women Farmers Organisation in Nigeria.

“The aim then as it remains today is to help in projecting and finding solutions to the challenges faced by the agriculture sector ranging from issues of inadequate budgetary allocation to the sector, inadequate land for farming, bad road network from farm gate to market, lack of access to farm inputs, invasion of farmland by herdsmen, lack of funds available to farmers, to threat from climate change and ineffective agricultural policies.”