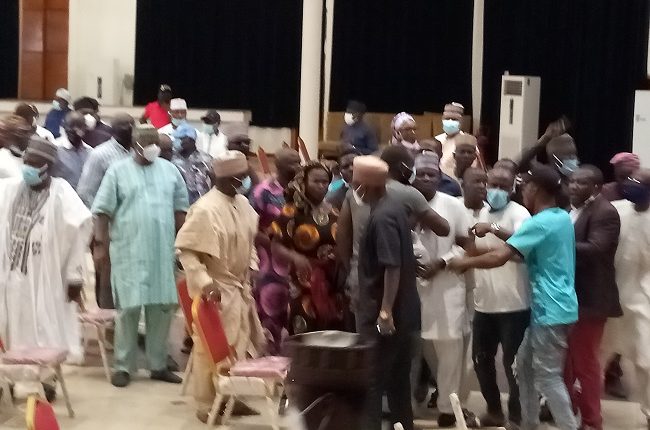 Stakeholders meeting, convened by the APC membership registration and revalidation committee sent from the national headquarters of the party to keep party members abreast of the exercise in Kwara State ended abruptly, in Ilorin, on Wednesday afternoon.

Tribune Online gathered that the screening process for the event was already going on at the State Banquet Hall, located opposite Government House, Ilorin, when the reportedly removed chairman of the party, Hon Bashir Bolarinwa, stormed the venue ultimately to gain entry.

It was gathered that pandemomiun broke out as the embattled party leader and his supporters met stiff resistance from personnel conducting the exercise and some supporters of the new chairman of the party’s state caretaker committee chairman, Alhaji Abdullahi Samari.

Hon Bolarinwa and his supporters later reportedly forced their way into the hall, as they reportedly broke the glass door at the entrance leading to the main hall, amidst shout of expression of anger.

It was also gathered that a member of the seven-man registration and revalidation committee told the protesting crowd to be patient, saying that the reportedly removed chairman was actually invited to the meeting, expressing surprise at the turn of event.

It was also observed that seats for the minister of Information and Culture Alhaji Lai Mohammed, and that of the minister of state for Transportation, Senator Gbemi Saraki, was allocated at the high table at the event.

However, due to the pandemonium that ensued, the planned stakeholders meeting for the party leaders in the state could no longer hold on Wednesday as the committee members were later seen at Idi Igba ward, where Governor Abdulrahman Abdulrazaq flagged off the membership registration exercise.

However, another version of the development said that the purportedly removed state APC caretaker chairman, Hon Bashir Bolarinwa, the APC woman Leader, Ramat Laide Alake, and their supporters were attacked by some party members when they tried to gain enty into the venue of the meeting.

The version said that windscreen of a car belonging to the APC women leader was also shattered and some personal belongings were allegedly stolen.

Court asked to stop Adamu from parading as IGP