Top News
By Kunle Oderemi and Abiodun Awolaja On Jun 29, 2016 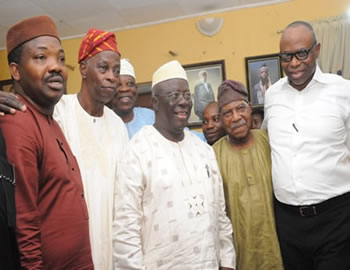 THERE was further outrage over the sarcastic remarks of the Secretary to the Government of the Federation (SGF), for describing delegates to the 2014 National Conference as boys.

In a statement by the state Commissioner for Information, Mr Kayode Akinmade, Mimiko said restructuring is an idea whose time had come and, therefore, there could be no running away from the confab report.

He described the confab report as the road map for Nigeria’s redemption, while urging all Nigerians to key into the advocacy to restructure the country.

“By any standard, describing the 2014 confab, the road map for Ngieria’s redemption, as offering mere ‘food for the boys’ is unjustifiable and spurious,” he said.

He said the comment amounted to an insult, given the high calibre of delegates from the Northern and Southern parts of the country that met to frontally tackle critical issues impeding the unity, stability and progress of the nation.

He noted that the delegates comprised elder statesmen, renowned jurists, proven professionals, notable clerics, labour and youth leaders and many other senior citizens who had served the nation at different capacities and distinguished themselves in the service of their fatherland.

He wondered if such notable citizens as Chief Richard Akinjide (SAN), Alhaji Ibrahim Coomasie, Pastor Tunde Bakare, Chief Olisa Agbakoba (SAN); Mr Femi Falana (SAN), and hordes of other distinguished sons of the country could be described as boys.

Chief Adebanjo also said it was preposterous for the SGF to have referred to those who were old to be father as boys, adding that it was doubtful that even President Muhammadu Buhari would have made such a nauseating remark.

On his part, Chief Falae noted that it was inexplicable for the SGF to have made such comment, as a number of the delegates were octogenarians, who have continued to conscientiously avail the country of their wealth of experience and resources.

However, he cautioned Nigerians from being distracted, by insisting that the report of the confab should not be wished away.

Falae, who had served as SGF and Minister of Finance in the past, said while the current SGF could call delegates to the confab anything he wished, the fact remained that it took five months of hard work, sacrifice and compromise, as well as patriotism by senior citizens of the country to hold a successful conference.

He noted that more than 492 delegates consisting of distinguished citizens and professionals, as well as other core stakeholders rose above any narrow interest to painstakingly discuss and proffer realistic solutions to issues constituting impediment to Nigeria’s unity and progress.

He said such assemblage had never happened in the history of the country, as he recalled that most of the more than 600 resolutions were reached by consensus.

“The report (of the confab) can never be wished away, as it is about the future of this country,” Chief Falae stressed.

Also speaking in separate interviews with the Nigerian Tribune, on Wednesday, the secretary to the South-West delegation to the conference, Dr Kunle Olajide; Afenifere spokesman, Mr Yinka Odumakin; national chairman of the National Conscience Party (NCP), Dr Yinusa Tanko and erudite scholar and Awoist, Professor Akinyemi Onigbinde, all maintained that the denigration of  the conference report and the eminent Nigerians who participated in it was highly provocative and injurious to the well-being of Nigeria and Nigerians.

Describing the statement credited to the SGF as most unfortunate and worrisome, Dr Olajide observed that sometimes, the utterances of one or two officials of the Presidency could be very embarrassing to the administration, because the tendency was to believe that they reflected its mindset.

Olajide said the SGF’s statement gave the impression that the Presidency was peopled by narrow-minded and prejudiced people, adding that Lawal should apologise to Nigerians for insulting their sensibilities with his unprovoked attack on respected elder statesmen and accomplished Nigerians who participated in the conference to address the fundamental issues in Nigerian nationhood.

He said: “The SGF’s position is too important for any form of flippancy. It is unbelievable that the SGF, with full knowledge of the composition of that conference headed by a past Chief Justice of Nigeria and attended by former ministers of the First and Second Republic; former Inspectors-General of Police, Alhaji Mohammed Gambo, the Emir of Dutse and a host of very important personalities, Chief Justices, retired Major Generals, top bureaucrats and professionals, could say that it was a job for the boys.

“I have been disturbed by some of the statements emanating from the Presidency; if the SGF could say what was credited to him, then perhaps, I should not be too surprised by the comments of Mr President, saying he had thrown the report of the conference into the archives.

“Mr President should call his top officials to order. Whatever statement emanates from the SGF, Chief of Staff, the vice-president and special advisers to the president could, of course, be interpreted as the reaction of the president.

“I don’t want other climes to regard our presidency as an ill-informed presidency. He (Lawal) has to apologise to Nigerians, not even to the conference delegates.”

In his own reaction, Odumakin said the SGF’s position was a reflection of his level of exposure, adding that small-minded people in big offices usually made a mess of their positions.

“I have always wondered where the SGF is coming from since his appointment. After reading his rude and crude comments on the 2014 national conference and its delegates, I Google check him. Interestingly, it took me 58 seconds to read through his CV and the question still is: where the heck is this gentleman coming from? But his terse resume tells me he should be an authority on “jobs for the boys” as it is that concept that would make a man of his level of exposure and accomplishment to be Secretary to the Federal Government of Nigeria.

“When you put small men in big offices, they reduce such offices to their own level. And that is the reason you will see a man holding such an office and making light of an issue that has to do with the very existence of Nigeria,” he said.

Dr Yunusa Tanko, on his part, advised those who had found themselves in positions of authority to be mindful of their utterances, adding that Lawal’s pejorative tagging of the calibre of distinguished people who had worked tirelessly for the country at the conference was very wrong.

He added: “No matter the way he feels, there are critical issues addressed in the report of the conference that need to be looked into. He should apologise.”

Tracing the history of the agitation for restructuring since the onset of the current Republic in 1999, Onigbinde regretted the antics of some members of the South-West All Progressives Congress (APC) who, while in opposition, were clamouring for restructuring during the eight years of former President Olusegun Obasanjo, only to turn around and kick against the same project when the Goodluck Jonathan-led administration initiated the 2014 conference, all because it had emerged that they could capture federal power in 2015.

“They opposed the convocation of the 2014 conference, saying it was a mere diversionary tactic by the Jonathan administration. Even if they were right that Jonathan had motives, the point still remains that, after the so-called jamboree, a report came out, and whatever motives Jonathan had were not realised, as he was defeated in the 2015 presidential election.

“Now, there is a report, so what is their attitude to it? The issue is not motive, but whether the report is beneficial to Nigeria, in view of the Boko Haram and Avengers problems, which are at the centre of the national question. Now that a report is out, we ought to have forgotten about the motive.

“My position is that everybody just loves federal power, not that they were really interested in addressing the equitable relationship among the federating units. They just believe it is their turn to enjoy federal power and they don’t want anybody that will deny them the benefits of the current inequalities.”