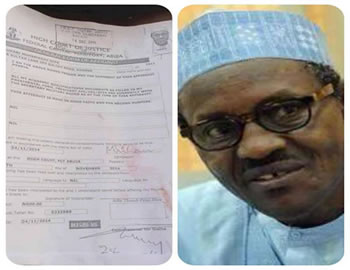 A Federal High Court in Abuja, will today, deliver a ruling on the stay of execution on an earlier ruling it delivered in a suit challenging the authenticity of the academic credentials of President Muhammadu Buhari.

Buhari had, recently, appealed against the previous ruling of the court, dismissing his preliminary objection to the suit filed by an Abuja-based legal practitioner, Nnamdi Nwokocha-Ahaiwe.

Nwokocha-Ahaiwe, in the suit, had argued that Buhari was not qualified to contest the office of the President of the Federal Republic of Nigeria on the ground that he did not possess the minimum academic qualification to do so.

He also alleged that Buhari did not sit for the Cambridge West African School Certificate (WASC) in 1961, as he had earlier claimed.

When the matter came up on Wednesday, parties in the case were not present in court and the trial judge, Justice Adeniyi Ademola, attributed the absence of the parties to the fact that they might not have been served hearing notices on the new adjourned date.

The Judge consequently adjourned the case till today to deliver ruling, to enable parties to be served on the new adjourned date.

It will be recalled that the case was said to have been adjourned indefinitely at the last sitting.

There have been controversies over the academic credentials of President Buhari prior to the 2015 general election.

The president, who is being represented by a team of senior lawyers, led by Chief Wole Olanipekun, was alleged not to have included his West African School Certificate among the documents he tendered to the Independent National Electoral Commission (INEC) in the build-up to the election.

The president was said to have written to INEC, stating that his Secondary School Certificate was with the Military Board.