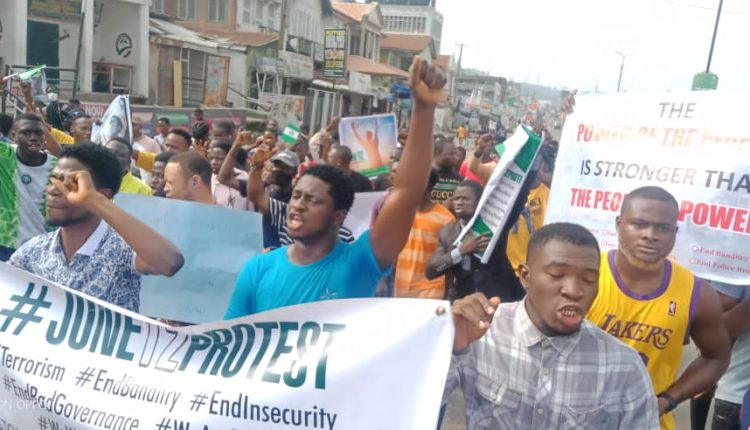 The Peoples Democratic Party (PDP) has condemned, in strong terms, the violent clampdown by those of called the agents of the All Progressives Congress (APC) and President Muhammadu Buhari on Nigerians who are peacefully protesting on Democracy Day.

In a statement issued on Saturday by Kola Ologbondiyan, its National Publicity Secretary, the party described the brutal clampdown on citizens on Democracy Day as “a sacrilegious demonstration of APC’s aversion to democracy as well as its barefaced repugnance towards Nigerians, particularly in their demands for their rights”

The main opposition party added: “It is awkward that the APC and President Buhari, who were allowed their freedom when they protested in 2014, would turn around to subject Nigerians to actions of inhumanity including the use of firearms against the people, as being witnessed today.

“It is instructive to note that President Buhari, in his supposed Democracy Day address, failed to rein in his security operatives despite the cautions by the PDP. This places the culpability for whatever befalls Nigerians, in the face of the violent attacks by security agencies, on the APC as well as Mr President’s desk.”

The PDP said it is not surprising that in his over 20 minutes speech, Mr President never made any commitment towards upholding the democratic tenets of free speech, freedom of expression, freedom of association and right to peaceful protest, as enshrined in the 1999 Constitution and our statutes, from which he, as APC candidate, drew huge benefit in 2014.

The party informed that it is cataloguing all the infringements which the APC and President Buhari are “rudely imposing on Nigerians” and we urged all global democratic institutions to take note of the violent infringements and clampdown on democracy in Nigeria by the APC.

In spite of the huge investment in the water sector by the government and international organisations, water scarcity has grown to become a perennial nightmare for residents of Abeokuta, the Ogun State capital. This report x-rays the lives and experiences of residents in getting clean, potable and affordable water amidst the surge of COVID-19 cases in the state…PDP condemns clampdown  PDP condemns clampdown

The Lagos-Ibadan railway was inaugurated recently for a full paid operation by the Nigerian Railway Corporation after about a year of free test-run. Our reporter joined the train to and fro Lagos from Ibadan and tells his experience in this report…PDP condemns clampdown  PDP condemns clampdown