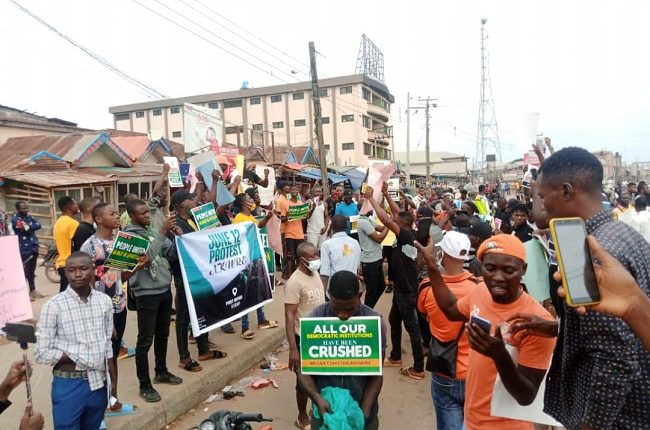 As Nigeria commemorates democracy day today June 12, 2021, took to the street to join their counterparts across the country demanding good governance.

The youths who converged on the Adegbemile Culture Center, Akure, the state capital for the peaceful rally around 7:45 am were armed with placards of various inscriptions which include, Buhari must go”, “Our Voice Must be Heard”, “Enough is Enough, No to Grandpa’s Regime,” among others.

The youths who marched through the streets of Akure chanting series of solidarity songs, lamented over the security situation of the country, saying no one is safe in any part of the country anymore.

The youths who moved from junction to junction before terminating the protest at NEPA Roundabout, condemned the attitude of the APC led government in the country, saying the present administration dashed the hopes of Nigerians.

The youths who registered their displeasure over the current situation of the country noted that the country had never had it so bad like this since independence, called on the Nigerian leaders to come out with solutions to the challenges confronting the country.

According to one of the protesters, Shuaib Nasir, who said “What we are saying is that Buhari should readdress the situation of this country. We don’t want killings, kidnappings, banditry anymore. We just want to be safe. Let the President put an end to unnecessary killings and attacks.

Shuaib said the protest became necessary because of the silent posture of President Buhari on the security of lives and property and other challenges confronting the nation.

“The present administration has betrayed us. They took the issue of security with levity. All we are saying is Buhari must go. We are just tired. We don’t even know what is going on again in the country.

“Truth has been killed. Awolowo gave them free education. Why should students be killed like rams? We have to put an end to bad governance.

“At this point, we know that Buhari is no longer capable. He should just step down before plunging the country into total ruins. Buhari is not ready to listen. All we want is that Buhari must go now.”

Also speaking, one of the leaders of the protest, Tope Temiokun said that the country has never had it so bad since independence and urged Nigerian to prepare ahead of the 2023 general elections in order to do the needful.

“Today is a day of expression, anger and grievances by the Nigerian people free our states from the shackles of this government.

However, Tribune Online observed that commercial and social activities were grounded in Akure, as shops were not opened while some of the residents were sceptical that the protest might take the same dimension experienced during the End SARS protest where massive violence was recorded.

Also, all the major roads within Akure metropolis were deserted with few vehicles seen on the ever-busy Oba Adesida-Oyemekun road and Oba-Ile/Airport road among others.

Meanwhile, security operatives were seen positioned at strategic locations to forestall any breakdown of law and order during the protest.

In spite of the huge investment in the water sector by the government and international organisations, water scarcity has grown to become a perennial nightmare for residents of Abeokuta, the Ogun State capital. This report x-rays the lives and experiences of residents in getting clean, potable and affordable water amidst the surge of COVID-19 cases in the state…#June12protest paralyzes  #June12protest paralyzes