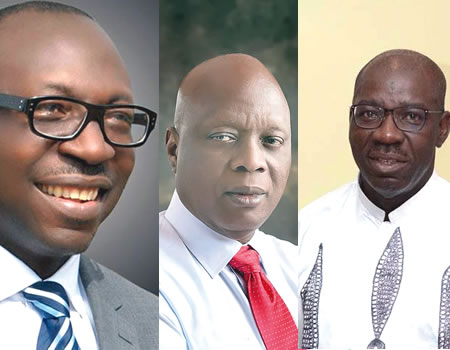 JUSTICE Mohammed Umar Garba of the Federal High Court, Benin on Thursday ordered the transmission of the ongoing suit challenging the mode of the governorship primary of the All Progressives Congress (APC) in Edo State to the Court of Appeal.

Justice Umar of the Federal reserve High Court, Benin who ruled at the resumed hearing of the case by seeking to restrain the National Working Committee (NWC) of the All Progressives Congress (APC) and the party’s national chairman, Comrade Adams Oshiomhole from using direct primaries to elect Edo State governorship candidate of the party.

The trial judge adjourned the case which seeks to restrain the National Working Committee (NWC) of the APC and the party’s national chairman, Comrade Adams Oshiomhole from using direct primaries to elect its governorship candidate to June 17.

Joined in the suit‎ by the factional state deputy chairman of the APC, Pastor Kenneth Asemokhai and a governorship aspirant of the party, Matthew Iduoriyekemwen is the Independent National Electoral
Commission (INEC).

He said his ruling on the 8th of June that no action on the party primaries subsists pending on the outcome of the court of Appeal.

Having listened to both parties in the arguments, Justice Umar said the decision earlier reached by the court remains standing pending on the outcome of the court of Appeal.

“Having listened to both parties in this matter, I hereby ordered that the case be transmitted to the court of Appeal and the ruling earlier made subsists.

“The case has been adjourned to Wednesday, June, 17th, 2020 for hearing to know what the court of Appeal has to say,” the judge said.

On his arguments, Counsel to the second defendant, Barr. Roland Otaru said the Court lacks the jurisdiction to have given the order of stale of executions on the 8th of June and thus decided to appeal on the matter.

He said the issue of jurisdiction is like a “traffic light” that should be obeyed and that going ahead with the case will amount to judicial reckless.

He prayed the court to hands-off on the matter as it has already been appalled at the higher court and that if the higher court decided otherwise, they have no option than to come back to the same court.

Also for Ken Mozia, Counsel to the plaintiff, he argued that he has not been served with the various papers and that the subject matter being argued has not been ruled upon by the court, therefore, there is no case of issues of jurisdiction or not coming.

He argued that time is of the essence and that the court should be given the time to do its job rather than flooding the court with various papers from the court of Appeal.

EDITORIAL: The Story Of Majek Fashek
BY the time he died on June 1, aged 57, Majekodunmi Faseke, or simply Majek Fashek to his distraught fans all over the world, had lived his life to full circle. Of course, he was not an old man, but he had arguably seen it all. From the low, deprived, humble beginnings of childhood and the boisterous struggling years of adolescence to the peak of prominence and global fame, then back to the ebb of existence, Majek Fashek had seen it all. Not many older persons could claim to have fumbled and tumbled through life than the man fondly referred to as the Rainmaker… APC Edo APC Edo APC  Edo APC EdoRead full story